Pakistan Train Accident: The deadly accident occurred when the Sir Syed Express headed from Rawalpindi to Karachi, coming from the other direction, smashed into derailed coaches of the first train, a spokesperson of Pakistan Railways said. An express train rammed into derailed coaches of another train, killing up to 51 people and injuring over 100 others in Pakistan’s southern Sindh province on Monday, forcing authorities to call in the Army and paramilitary forces for rescue and relief operations in one of the worst rail accidents in the country in recent years.

The Millat Express train from Karachi to Sargodha derailed and its coaches fell across the adjacent track near Dharki, a city located in the Ghotki district of upper Sindh.

The deadly accident occurred when the Sir Syed Express headed from Rawalpindi to Karachi, coming from the other direction, smashed into derailed coaches of the first train, a spokesperson of Pakistan Railways said.

Fifty people, including some railway officials, have lost their lives, Ghotki Deputy Commissioner Usman Abdullah was quoted as saying by ARY News. Late at night the toll was updated to 51. Over 100 persons were injured in the accident, officials said.

Ghotki SSP Umar Tufail said the toll may rise sharply as there were still mangled train compartments that rescuers had not been able to access despite the passage of hours since the accident. “At least 25 people have serious injuries and are in a critical condition,” he said.

An emergency was declared at hospitals in Ghotki, Dharki, Obaro and Mirpur Mathelo where injured were rushed.

Senior officials said that 13 to 14 bogies were derailed in the accident while six to eight “completely destroyed”.

Rescuing passengers who are still trapped is a “challenge” for the rescue officials, Abdullah said, adding that a relief train has departed from Rohri.

“This is a challenging task. It will take time to use heavy machinery to free citizens (still trapped). We are also establishing a medical camp to provide medical aid to citizens,” he said.

“The driver tried to apply emergency brakes but the locomotive hit the infringing coaches,” the railways said in an initial report.

Officials were still trying to retrieve bodies and the injured from one of the mangled coaches, with the effort being hampered by lack of appropriate cutters.

The Inter-Services Public Relations (ISPR)  “the media wing of the military” said army doctors and ambulances were participating in the rescue operation. 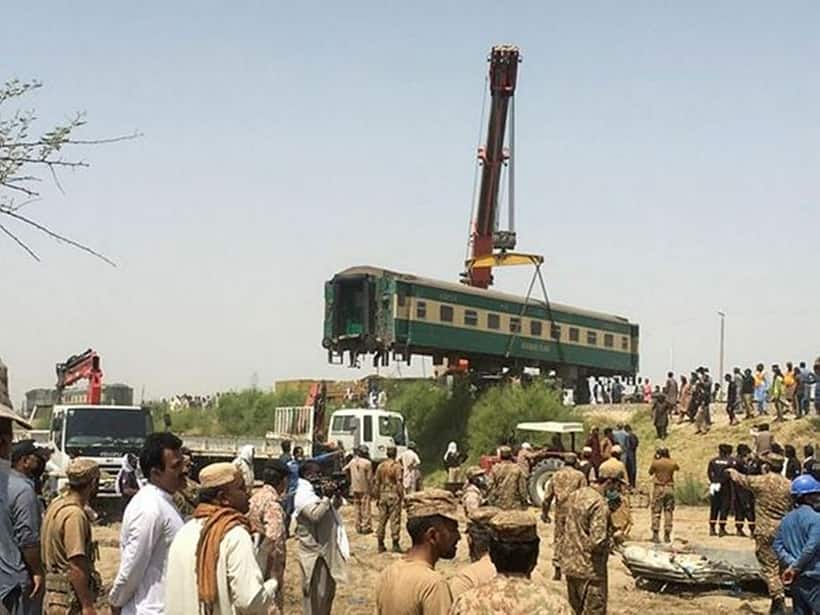 Army engineers and specialist teams of Urban Search and Rescue – equipped with disc cutters, hydraulic spreaders and other specialised machinery – also reached the site after being airlifted from Rawalpindi to aid the effort.

“Shocked by the horrific train accident at Ghotki early this morning leaving 30 passengers dead. Have asked the Railway Minister to reach the site & ensure medical assistance to injured & support for families of the dead. Ordering comprehensive investigation into railway safety faultlines,” he tweeted.

President Arif Alvi also expressed sorrow over the loss of lives in the train accident.

Sir Syed Express train’s driver Aijaz Shah, who survived the accident, said that he was rescued by locals after two hours of the collision.

According to officials, over 1,000 passengers were on board the two trains.

Around 20 passengers still remained trapped in the wreckage of some of the bogies which were damaged and overturned, a spokesperson for the railways department said, adding that officials were accumulating all the information of the passengers and staff on both the trains.

“It will take some time for the rescue operation to be completed as heavy machinery is required to remove the damaged coaches,” one official said.

“Machinery should be arranged to rescue passengers that are still stuck. Arrangements should also be made at nearby hospitals to treat those that have been injured,” he said, directing the official to arrange temporary accommodation and food for the passengers.

“An information system should be set up so that citizens can get accurate information,” the Sindh Chief Minister said.

The authorities have announced Rs 1.5 million (15 lakh) ex gratia each to the next of kin of those killed. The injured will be given a minimum of Rs 100,000 and a maximum of Rs 300,000, depending upon the nature of the injury, Geo News reported.

Train accidents are common in Pakistan and dozens of people lose their lives every year. The railways have seen decades of decline due to graft, mismanagement and lack of investment.

According to a senior former railways official, such accidents happen from time to time all over Pakistan as the railways network remains outdated in many places.

“In some areas, they are still using the same network and tracks which were laid before the Partition,” the former official added.

In July 2020, at least 20 people were killed when the Shah Hussain Express train rammed into a coaster near Sheikhupura in Punjab.


Around 30 people were travelling on the vehicle from Nankana Sahib to Peshawar, out of whom 13 males and seven females died in the accident. The deceased had included 19 Sikh pilgrims and the driver of the vehicle.

This incident came four months after a bus crossing an unmanned railway crossing near Rohri in Sindh was crushed by the Lahore-bound Pakistan Express train coming from Karachi on February 28, 2020, killing at least 19 people and leaving more than 30 injured.