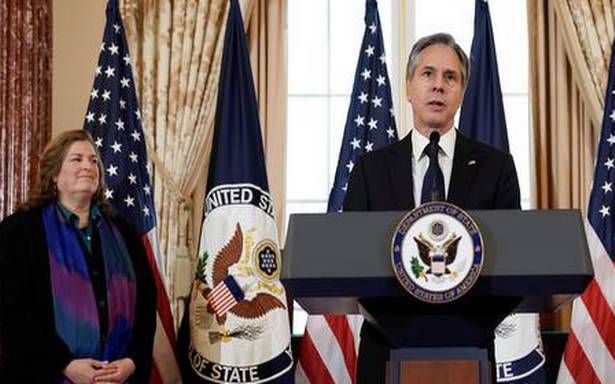 The report said that the Chinese government engaged in “widespread forced labour, including through the continued mass arbitrary detention of more than one million Uyghurs, ethnic Kazakhs, ethnic Kyrgyz, and other Muslims” in Xinjiang.

The pandemic resulted in an increase in vulnerability to human trafficking and interrupted existing anti-traffic efforts, according to the Trafficking in Persons report, an annual study released by the U.S. State Department. The U.S. has determined that governments of twelve countries, including China, had a policy of trafficking in the reporting period (year ending March 31). On India, the report says that while it did not meet the minimum standards to eliminate trafficking, the government was making significant efforts, although these were inadequate, especially when it came to bonded labour.

“The concurrence of the increased number of individuals at risk, traffickers’ ability to capitalise on competing crises, and the diversion of resources to pandemic response efforts has resulted in an ideal environment for human trafficking to flourish and evolve,” Kari Johnstone, the official with oversight of the report wrote in it its introduction.

Twelve governments were determined, by the State Department, to have a “policy or pattern” of human trafficking resulting in their countries being assigned a ‘Tier 3’ rating in the report. Afghanistan, Burma, China, Cuba, Eritrea, North Korea, Iran, Russia, South Sudan, Syria and Turkmenistan were on this list.

The report said that the Chinese government engaged in “widespread forced labour, including through the continued mass arbitrary detention of more than one million Uyghurs, ethnic Kazakhs, ethnic Kyrgyz, and other Muslims” in Xinjiang.

For India, the report said the government is not meeting the minimum standards to eliminate trafficking “but is making significant efforts to do so.” The government, in the US administration’s view, had increased efforts in the latest reporting period relative to the previous one, taking into account the impact of the pandemic on anti-trafficking efforts, resulting in India retaining a Tier 2 classification. The report said the efforts included identifying more victims of trafficking and prosecuting more cases.

On the chapter on the United States, the report says that although the government met the minimum standards for the elimination of trafficking, it had policies in place that limited immigration options for trafficking victims, before repealing those policies. There is also a reference to unaccompanied minors being expelled from the U.S.