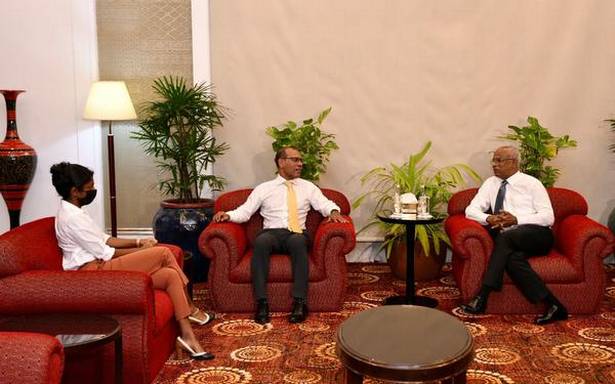 Former President and Parliamentary Speaker of the Maldives Mohamed Nasheed on Monday returned to capital Male, five months after he survived an assassination bid, following which he was flown to Germany to undergo treatment for the grave injuries.

Also Read: A man of many comebacks

President Ibrahim Mohamed Solih received the Speaker, also his party colleague, at the airport, signalling a thawing of tensions between the leaders, after Mr. Nasheed criticised the President for “pandering to religious extremists”.

Mr. Nasheed’s return was kept under wraps due to persisting security concerns, according to sources in Male. “It is nice to be back home,” he told The Hindu from Male on Monday night.

The explosion on May 6, near Mr. Nasheed’s residence took the Maldives and the world by shock. Maldives police termed the incident a “terror attack” and attributed it to a local religious extremist group that sympathises with the Islamic State. Police have arrested some key suspects in the case and are continuing the probe with assistance from the Australian Federal Police and American investigators.

Mr. Nasheed openly condemns religious extremism and the attack on him was widely seen as a chilling message to critics.

Months into his recovery, Mr. Nasheed issued a statement asking President Solih to “course-correct before it is too late”.

The Maldivian Democratic Party (MDP) to which both President Solih and Mr. Nasheed belong, was on the verge of a split amid growing differences between the two factions backing them, especially over the party’s response to religious extremism. However, the party has stayed together until now.