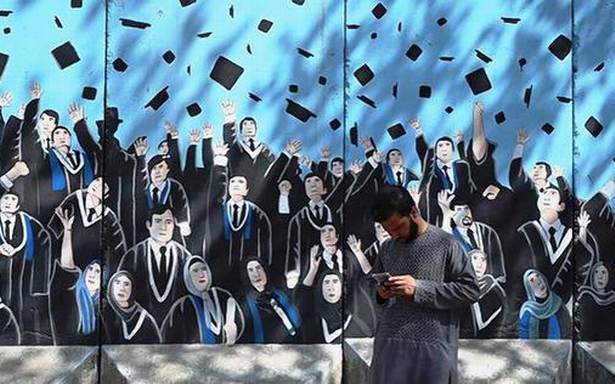 Interim govt. says protests will need prior authorisation from the Justice Ministry

Earlier this week armed fighters dispersed hundreds of protesters in cities across Afghanistan, including the capital Kabul, Faizabad in the northeast and in Herat in the west, where two people were shot dead.

Late on Wednesday, the Taliban moved to snuff out any further civil unrest, saying protests would need prior authorisation from the Justice Ministry, adding that “for the time being” no demonstrations were allowed.

There was a noticeably stronger Taliban presence on the streets of Kabul on Thursday morning as armed fighters, including special forces in military fatigues, stood guard on street corners and manned checkpoints. An organiser of a protest outside the Pakistan Embassy — where gunmen sprayed shots into the air on Tuesday to disperse a rally — said on Thursday it had been cancelled because of the overnight ban.

At the site of another planned protest in the city, there were no signs of a demonstration.

A Taliban interim government, drawn exclusively from loyalist ranks, formally began work this week with established hardliners in all key posts and no women. All the top positions were handed to key leaders from the movement and in particular the Haqqani Network — the most violent Taliban faction.

The feared Ministry for the Promotion of Virtue and Prevention of Vice — previously responsible for arresting and punishing people for failing to implement the movement’s restrictive interpretation of sharia — is being reinstated.

There were other superficial signs of the Taliban tightening their grip. Images on social media showed the country’s main airport — previously dubbed Hamid Karzai International, after the first post-Taliban President — had been renamed Kabul International.