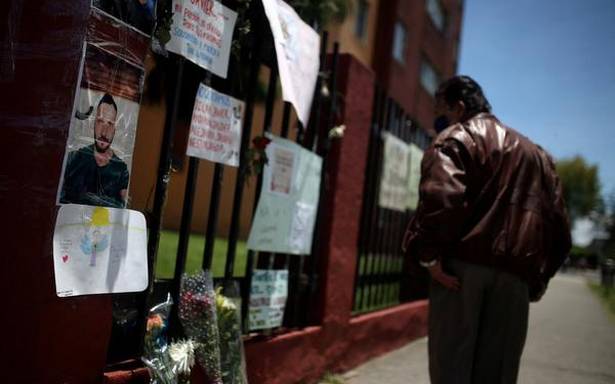 The 182-page report says that on September 9-11, 2020, police in Colombia committed a “massacre” against civilians in low income neighbourhoods.

Colombian police killed at least 11 people during protests that broke out in September of last year, following the death of a taxi driver who was beaten to death while in police custody, a report backed by the United Nations found.

The 182-page report published on Monday says that on September 9-11, 2020, police in Colombia committed a “massacre” against civilians in low income neighbourhoods.

It says violence spun out of control because officers reacting to protests in front of police stations were unprepared to handle large crowds and were not given orders by their superiors to refrain from using firearms.

According to the report’s authors, 75 people were injured by firearms during the three nights of protests in which police officers were also filmed destroying private property and a total of 14 people were killed by police, protesters who hijacked a bus and civilians using firearms.

Seventeen police stations in Colombia’s capital city were set on fire and destroyed by protesters on September 9-11 after videos emerged on social media of two policemen detaining a 44-year-old taxi driver who was drinking on a sidewalk and beating him repeatedly while an onlooker begged for them to stop. Taxi driver Javier Ordoñez died that night from his injuries.

“Everyone made mistakes on the 9th and 10th of September, except for the victims of this tragedy,” said Carlos Negret, a lawyer and human rights expert who led the fact-finding report. “Police acted with disproportionate use of force and went after the poorest people in the city,” he said.

The report was commissioned last year by Bogota’s city government, which held a public ceremony where it asked for forgiveness from the victim’s families.

It is based on interviews with more than 90 witnesses, police officers and members of the victims’ families and received technical assistance and financial support from the United Nations.

The findings come as police in Colombia face greater scrutiny for their behaviour during protests and different sectors call for the reform of an institution that has long been deployed to fight drug trafficking gangs and guerrilla groups in rural areas and is poorly equipped to handle large crowds of civilians in urban areas.

Earlier this year, dozens of people died in protests over tax hikes and inequality that included roadblocks and small pockets of violent protesters, mixed among mostly peaceful crowds.

According to evidence gathered by Human Rights Watch, police in Colombia could be implicated in 25 of those deaths.

Monday’s report calls on the Colombian government to reform the country’s laws so that municipal governments have greater control over police forces.

Currently, Colombia’s police forces are run by the Ministry of Defence and only takes orders from the national government.

The report points out that so far, four police officers are facing murder charges for the deaths that occurred in the September 2020 protests, though there are still no convictions and none of the officers charged with murder is in prison.

The report also calls on Colombian prosecutors to investigate the role that high-ranking officers may have had in the violent response to the protests in September.