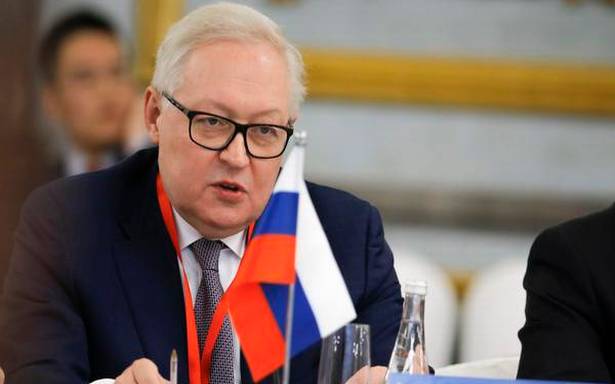 ‘There is a risk that relations could worsen further between Russia and the U.S.’

Russia and the United States failed to make any major progress on Tuesday in resolving a row over the size and functioning of their embassies and there is a risk that relations could worsen further, Russia’s Deputy Foreign Minister Sergei Ryabkov said.

With ties already at post-Cold War lows, the two countries are in a dispute over the number of diplomats they can post to each other’s capitals, though Moscow said it was willing to lift restrictions imposed in recent years.

"I cannot say that we have achieved great progress," Interfax news agency quoted Mr. Ryabkov as saying after talks in Moscow with U.S. Under Secretary of State Victoria Nuland. "There is a risk of a further sharpening of tensions."

Ms. Nuland’s meetings with Russian officials have been "useful," U.S. State Department spokesperson Ned Price said at a briefing for reporters, adding that U.S. stance on the staffing of U.S. missions in Russia remained "firm."

"We expect parity on staffing numbers and we expect visa reciprocity. There must be fairness, there must be flexibility on the Russian side, if we are to achieve an equitable agreement and that’s precisely what we are after," he said.

He said there will be another round of talks at a lower level and that Washington hoped to find a resolution to the ongoing dispute. "We need an adequately staffed embassy in Moscow," he said.

Last week the Russian foreign ministry said a U.S. congressional proposal to expel 300 Russian diplomats from the United States would lead to the closure of U.S. diplomatic facilities in Russia, if implemented.

U.S. senators urged President Joe Biden to remove the Russian diplomats because they said Russian curbs on the hiring and contracting of U.S. Embassy staff had left the United States with only about 100 diplomats in Russia compared with 400 Russians in the United States.

"It was emphasised on the Russian side that hostile anti-Russian actions would not remain unanswered, but Moscow did not seek further escalation," Russia’s Foreign Ministry said in a statement.

"We propose to remove all restrictions that have been introduced on both sides over the past few years."

Moscow does not rule out the work of Russian and U.S. diplomatic missions being frozen, but would like to avoid such a scenario, the RIA news agency cited Mr. Ryabkov as saying.

He said the two sides would hold new consultations on resolving the issue around visas and diplomats, without specifying a date.

Ms. Nuland, a veteran Russia specialist, is regarded by Kremlin hawks as someone who has stirred up anti-Russian sentiment in former Soviet republics such as Ukraine that Moscow considers within its sphere of influence.

Her visit comes at a time when ties between Washington and Moscow are badly strained over a host of other issues, including cyberattacks launched from Russia against U.S. businesses and the jailing of Alexei Navalny, the most prominent domestic opponent of President Vladimir Putin.

Mr. Biden and Mr. Putin held a summit in June in Geneva, when the U.S. president said Washington would find out in the next six months to a year whether it was possible to establish a worthwhile strategic dialogue with Moscow.