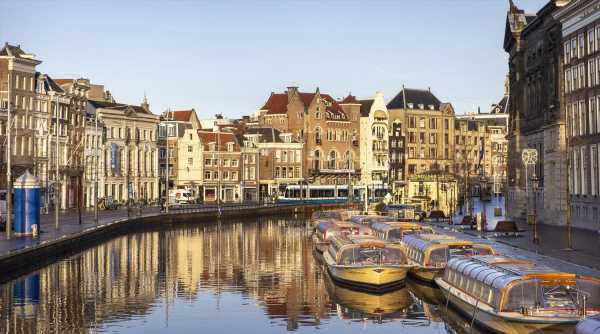 Amsterdam, with its scenic canals lined with picturesque, 17th- and 18th-century buildings, a major European tourist destination, is slowly crumbling. It was a rainy evening in April when Marlies Pinksterboer, an Amsterdam-based jewelry designer, was startled by a loud, rumbling sound. “It was as if a part of a building had come crashing down,” she said. “It was crazy.”

It was too dark to see what had happened, but when she opened the curtains in the morning she saw that the street on the other side of the canal had been cordoned off. A large sinkhole had appeared, and an antique lamppost next to it had fallen down. A shopping cart, devoured by the gaping pit, glittered in the hole.

Had it happened during the day, she said, “someone could easily have fallen in.”

That’s when Pinksterboer started worrying about the 17th-century canal house she lived in. “Will that one day come crashing down,” she wondered, half serious, while standing on one of the ancient brick and mortar walls that line the canals in her neighborhood of Groenburgwal, one of the oldest areas of Amsterdam. 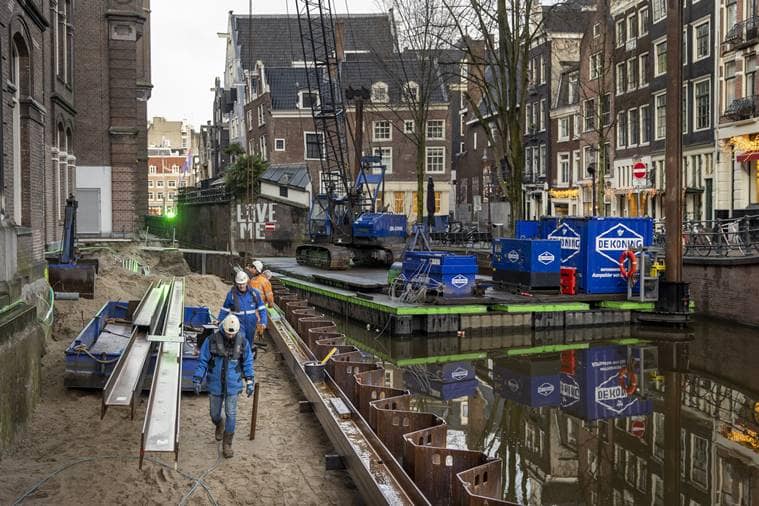 The danger is certainly not exaggerated. Amsterdam, with its scenic canals lined with picturesque, 17th- and 18th-century buildings, a major European tourist destination, is slowly crumbling.

Sinkholes are appearing in its small streets, and nearly half its 1,700 bridges are rickety and need repairs, frequently requiring trams to cross at a snail’s pace. As a huge project to shore up the canal walls gets underway, the city is beginning to look like one gigantic construction site.

The fundamental problem is the state of the walls: About 125 miles of them are so dilapidated that they are in danger of collapsing into the canals, potentially taking buildings and people with them.

Last year a canal wall near the University of Amsterdam came crashing down without warning, leaving sewer pipes dangling and disoriented fish jumping out of the water. Fortunately no one was walking by just then, but one of the tourist boats that constantly ply the canals had just passed.

Like much of the Netherlands, Amsterdam lies below sea level. Built on a swamp and heavily expanded in the 17th century, the city sits atop millions of wood pilings that serve as foundations. The Royal Palace on the Dam, for example, rests on 13,659 of them. Virtually everything in central Amsterdam is supported by these pilings. Perhaps surprisingly, the pilings are still in relatively good shape, but they were engineered for a different age.

“At the time these were built to carry the weight of horses and carriages, not of 40-ton cement trucks and other heavy equipment,” said Egbert de Vries, the alderman in charge of what promises to be an enormous rebuilding project. As modern life changed the city, many houses were fortified with cement and concrete, but the underpinnings of streets and canal walls were ignored.

Many of the wood pilings have shifted, cracked or collapsed under the pressure, causing the bridges and canal side walls to sag and crack. Water then seeps in, cleaning out mortar, further hollowing out the infrastructure and creating sinkholes.

Add to this all the traffic happily cruising the 17th-century canal rings where centuries earlier Rembrandt would walk to his studio and Spinoza debated religion. SUVs park right on the edges of the canals, while garbage trucks have displaced the boats that used to collect the waste. Before the pandemic, a flotilla of tourist boats swept through the canals, making sharp turns that created propeller turbulence, further eating away at the foundations.

Something had to be done, and soon. “If we would have continued like this we would have headed straight for a catastrophe,” De Vries said.

The reconstruction will take at least 20 years and cost 2 billion euros, about $2.5 billion, and perhaps even more, experts have calculated. “These are big numbers, and work needs to take place in a very busy, closely populated area,” De Vries said. “People live here and work here, and we usually have many tourists.”

In the center of the city, in the Grachtengordel, 15 bridges are currently under repair. Some are closed, like the Bullebak, an iconic bridge and critical part of the city’s infrastructure.

Engineers are trying to prevent the collapse of the canal walls the bridge is connected to, while at the same time disentangling a web of electricity and internet cables, phone lines and other services that use the bridge.

“It’s a very complex intervention,” said Dave Kaandorp, a building contractor working on the renovations. He did see one upside, as the canals were suddenly being used for what they were intended for. “We bring a lot of the building materials over the water now.”

Still, many mainly see the downside of all the work. Along several of the city’s most beautiful canals, historic trees have been cut down to ease pressure on the canal walls. Steel sheet piles shore up walls deemed to be in danger of imminent collapse. Divers and technicians with remotely operated underwater cameras search for the worst cracks.

“One would have hoped the municipality would have dealt with this earlier,” said Kadir van Lohuizen, a well-known Dutch photographer who focuses on climate change. He lives on one of the 2,500 houseboats in Amsterdam. “Instead they spent all their money on the new metro line.” That line, the North-South Line, about 7 miles long, cost more than 3 billion euros and took 15 years to build.

Van Lohuizen and the 24 other boat owners along the Waalseilandsgracht have recently been told they will have to relocate temporarily from spots where they have moored for decades so that repairs can be made to the canal walls.

“Some houseboats will be temporarily placed right in the middle of the canal. For others there is a chance that their boats won’t fit anymore after support systems for the walls are placed,” he said. “It’s a gigantic mess. Right now they are building at 2 kilometers a year, and 200 kilometers need to be repaired. This could take a century.”

The alderman, De Vries, acknowledged that Amsterdam in the coming years would look different from its usual postcard self. Still, he insisted that tourists should not be discouraged from visiting. “We invite everyone to come and see what we are doing,” he said. “We want visitors to realize that such a magnificent city needs maintenance.”

Pinksterboer, the jewelry designer, stood next to the closed-off bridge by the sinkhole. Small red plates have been connected to the base of the bridge and to the canal walls. “They use those to measure with lasers if the sagging is increasing,” she said. “It’s a warning system.”

She burst out singing a popular Dutch children’s song: “Amsterdam, big city/ It is built on piles/ If the city would collapse/ Who would pay for that?”

“I guess we are,” Pinksterboer said.