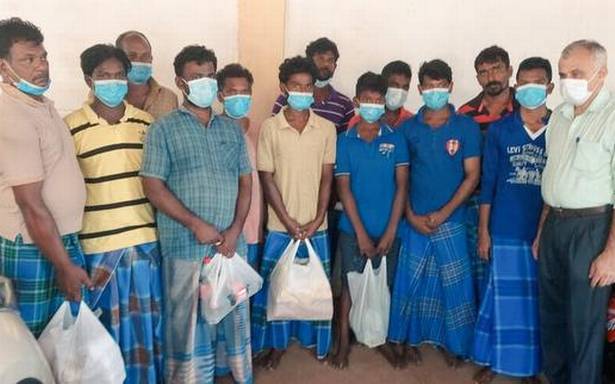 A Sri Lankan court in the northern Mannar district on Wednesday ordered the release of 13 Tamil Nadu fishermen who were in custody following arrest on charges of illegal fishing.

“Happy to learn from our lawyer in Mannar that 13 Indian fishermen from Tamil Nadu are being released,” the Indian High Commission said in a tweet on Wednesday morning. “Soon after the Court verdict, our official from @CGJaffna [Indian Consulate in Jaffna] met with the Indian fishermen and offered sweets. We are taking steps for [their] early return,” another tweet from the mission’s Twitter handle said.

The 13 fishermen were detained in December in one of three arrests made by the Sri Lankan Navy. A total of 68 Indian fishermen were arrested on charges of fishing illegally in Sri Lankan waters, and 10 mechanised boats were seized. Tamil Nadu Chief Minister M.K. Stalin wrote to the Centre, seeking the early release of the fishermen, while pointing to an “alarming frequency” of Sri Lanka arresting Indian fishermen.

The year 2021 proved a particularly tragic year for Tamil Nadu fishermen. Five fishermen returned home dead after they went fishing in the Palk Strait for a meagre daily wage. Fishermen’s associations accused the Sri Lankan navy of attacking them, an allegation that Sri Lankan authorities deny. Further, Sri Lankan arrested 231 Indian fishermen in 2021, the highest number of arrests [of Indian fishermen] made by the navy in a year, since 2017.

The Palk Bay fisheries conflict affecting fisher folk of Tamil Nadu and northern Sri Lanka remains a contentious bilateral issue, after many failed attempts by India and Sri Lanka to resolve it in the last decade. War-affected northern Sri Lankan Tamil fishermen have repeatedly asked their counterparts in Tamil Nadu to stop using the bottom-trawling fishing method, banned in Sri Lanka and considered destructive the world over. Tamil Nadu fishermen are yet to agree to the demand.

News of Sri Lanka releasing the 13 Tamil Nadu fishermen comes amid reports that fisher leaders from both sides might soon resume talks. Efforts are on through diplomatic channels to secure the release of the remaining Indian fishermen in prison, official sources said.