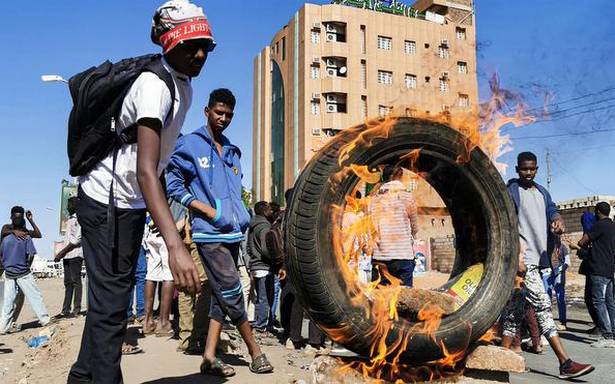 They call for disbandment of General Burhan-led ruling council

Sudanese security forces fired tear gas on Tuesday at anti-coup protesters in Khartoum chanting slogans against the military following the resignation of the country’s civilian premier on Sunday, witnesses said.

Protesters shouted “No, no to military rule” and called for the disbandment of Sudan’s ruling council headed by General Abdel Fattah al-Burhan, who led an October 25 coup that derailed a transition to civilian rule.

Streets leading to the presidential palace and army headquarters were sealed off by hefty deployments of troops, riot police and paramilitary units, witnesses said.

Security forces fired tear gas near the palace, and later at another rally north of the capital and in the eastern city of Port Sudan.

The protesters also gathered in Khartoum’s twin city Omdurman and the South Darfur capital Nyala, taking the total on the streets across the country into the thousands.

Other protesters urged the military “to go back to the barracks.”

Pro-democracy activists have stepped up calls for demonstrations since the October coup which saw then-Prime Minister Abdalla Hamdok and Cabinet Ministers detained.

The coup has triggered mass demonstrations and a bloody crackdown that has left at least 57 people dead, according to the independent Doctors’ Committee.

Mr. Hamdok resigned late Sunday — six weeks after he was reappointed by Gen. Burhan — saying the country was now at a “dangerous crossroads threatening its very survival”.

At least 13 women have allegedly been raped during the unrest, according to the UN.

On November 21, Gen. Burhan reinstated Mr. Hamdok in an agreement promising elections in mid-2023, but the protest movement slammed the deal as a “betrayal”.

Late Sunday, Hamdok announced that he was stepping down, saying he had tried to prevent the country “from sliding toward disaster” but that it was now at a “dangerous crossroads threatening its very survival”.

UN chief Antonio Guterres “regrets that a political understanding on the way forward is not in place despite the gravity of the situation in Sudan”, UN spokesman Stephane Dujarric said on Monday.

Sudan has been navigating a fragile transition towards full civilian rule since the April 2019 ouster of veteran president Omar al-Bashir following an unprecedented wave of youth-led protests.

Activists online had urged demonstrators to head to the presidential palace in Khartoum “until victory is achieved”, according to the Sudanese Professionals Association, an alliance of independent trade unions that was instrumental in the anti-Bashir protests.

Security forces are allowed to enter and search “any building or individual” and impose “surveillance of any property and facility”.

Since the coup, authorities have often disrupted internet services and communication lines to make it more difficult for activists to organise protests.