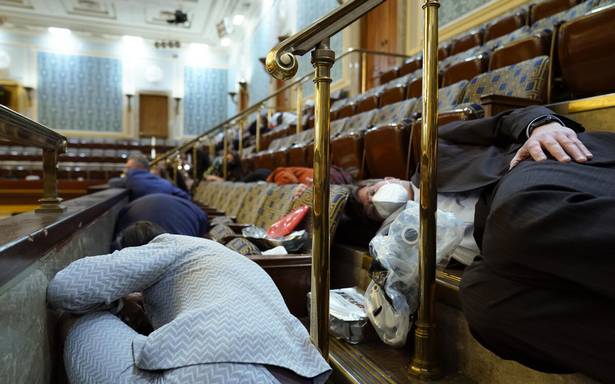 Lawmakers inside the House chamber were told to put on gas masks as tear gas was fired in the Rotunda.

Law enforcement instructed lawmakers to retrieve masks from under their seats amid the clashes. The Capitol building was placed on lockdown, as Trump supporters marched through evacuated public spaces in the building.

After egging on protests, Mr. Trump tweeted to his supporters to “stay peaceful” as they violently clash with law enforcement and breached the Capitol building.

Protesters are now inside the Senate chamber. One got up on the dais and yelled “Trump won that election.”

Several dozen are roaming through the halls, yelling, “Where are they?”

Some were also in the visitors’ galleries.

Lawmakers inside the House chamber were told to put on gas masks as tear gas was fired in the Rotunda.

A chaplain prayed as police guarded the doors to the chamber and lawmakers tried to gather information about what was happening.

An announcement was played inside the Capitol as lawmakers were meeting and expected to vote to affirm Biden’s victory. Due to an “external security threat,” no one could enter or exit the Capitol complex, the recording said.

Both chambers abruptly went into recess. The District of Columbia’s Mayor, Muriel Bowser, issued a curfew for 6 p.m.

The skirmishes occurred outside in the very spot where president-elect Biden will be inaugurated in just two weeks.

A suspicious package was also reported in the area, Capitol Police said.

The skirmishes came just shortly after Trump addressed thousands of his supporters, riling up the crowd with his baseless claims of election fraud at a rally near the White House on Wednesday ahead of Congress’ vote.

“We will not let them silence your voices,” Trump told the protesters, who had lined up before sunrise to get a prime position to hear the president.

After egging on protests, Trump tweets to supporters to ‘stay peaceful’

After egging on protests, President Donald Trump tweeted to his supporters to “stay peaceful” as they violently clash with law enforcement and breached the Capitol building.

“Please support our Capitol Police and Law Enforcement,” Mr. Trump tweeted, as tear gas was deployed in the locked-down Capitol. “They are truly on the side of our Country. Stay peaceful!”

Mr. Trump at a rally earlier Wednesday encouraged his supporters to head to the Capitol. “We’re going to cheer on our brave senators and congressmen and women, and we’re probably not going to be cheering so much for some of them,” Mr. Trump said.

Lawmakers are being evacuated

Lawmakers are being evacuated from the U.S. Capitol after protesters breached security and entered the building.

Senate Majority Leader Mitch McConnell and other senators were led out, escorted by staff and police on Wednesday afternoon. Members of the House were also being evacuated. Both chambers had been debating the certification of Joe Biden’s victory in the Electoral College.

The skirmishes came shortly after President Donald Trump addressed thousands of his supporters, riling up the crowd with his baseless claims of election fraud.

Protesters could be seen marching through the Capitol’s stately Statuary Hall shouting and waving Trump banners and American flags.

Some House lawmakers tweeted they were sheltering in place in their offices.

The mayor of Washington, D.C., has ordered a curfew in the nation’s capital beginning at 6 p.m. (local time) on Wednesday after protestors seeking to overturn the election results stormed the U.S. Capitol building.

Mayor Muriel Bowser issued the order as protestors supporting President Donald Trump breached the Capitol, where lawmakers were meeting to formally count the electors that will make Joe Biden president on Jan. 20.

The order extends through 6 a.m. (local time) on Thursday.

The skirmishes came shortly after Trump addressed thousands of his supporters, riling up the crowd with his baseless claims of election fraud.

There was confusion in the House chamber as the Capitol doors were locked and the debate over the electoral count was suspended.

A representative from the Capitol police spoke from a lectern on the dais and told lawmakers to remain calm, and that more information would be available soon.

Trump supporters rally on January 6, 2021, at the Capitol in Washington. As Congress prepared to affirm President-elect Joe Biden’s victory, thousands of people have gathered to show their support for President Donald Trump and his claims of election fraud.  | Photo Credit: AP

House Rules Committee Chairman James McGovern of Massachusetts told the crowd that the House expected to go back into session soon. Meanwhile, members milled around the floor and looked at their phones.

Reporters and others outside the chamber were told to go their seats inside and not leave.

The skirmishes came just shortly after Trump addressed thousands of his supporters, riling up the crowd with his baseless claims of election fraud.