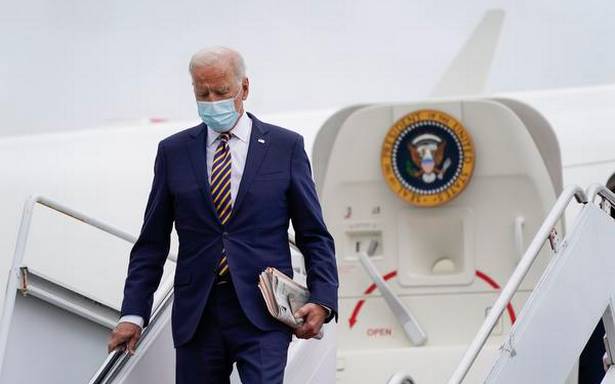 Over 1,50,000 Jains live in the United States, which is the community’s largest population outside India.

U.S. President Joe Biden has greeted the Jain community on the concluding day of Paryushan and Das Lakshan festivals. Over 1,50,000 Jains live in the United States, which is the community’s largest population outside India.

“Jill and I send our best wishes to Jains in the U.S. and around the world who’ve concluded the festivals of Paryushan and Das Lakshan,” Mr. Biden said in a Facebook post on Sunday.

“In this time for self-reflection and forgiveness, may we all find peace and reconciliation in our lives. Michhami Dukkadam and Uttam Kshama!” he said.

Paryushana is an annual eight to ten-day period of fasting and meditation for Jain worshippers. Das Lakshan is a 10-day festival that takes place after Paryushana. The Jain community in the U.S. welcomed the message from the U.S. president.

Ajay Bhutoria, South Asian community leader thanked the U.S. President for wishing the Jains and reminding the world of the three powerful resources of love, prayer and forgiveness.

“Today, for the first time in American history, a sitting U.S. President acknowledged the Jain festivals of Paryushan and Das Lakshan and issued a brief and meaningful message on their conclusion,” said Vaibhav Jain, who was senior advisor on the Asian American and Pacific Islander (AAPI) outreach team in the Biden Campaign.

Acharya Lokesh Muni in a statement also welcomed the greetings sent by the U.S. President.

“We would like to thank President Biden for his wonderful message on this auspicious occasion of the holy festival of Paryushan/Das Lakshan Maha Parvas for Jains around the world, seeking Michhami Dukkadam (Forgiveness),” said Mahesh Wadher, President JAINA, Jain association of North America.

The Jain day of Forgiveness is a very important day for Jains after celebration of Paryushan. On the last sacred day every member of the Jain community approaches each other, irrespective of religion and requests their forgiveness for all their faults or mistakes, committed either knowingly or unknowingly.

Thus, relieved of the heavy burden hanging over their head of the sins of yesteryears, they start life afresh, living in a peaceful co-existence with others.

According to the teachings of Jainism, this day is not merely a traditional ritual, but a first step on their path to moksha which is (liberation) or salvation, which is the final goal of every human’s life.

Jains are to ask for forgiveness from, family members, friends and acquaintances for the wrongs they may have committed knowingly or unknowingly by mind, speech, or deeds.

Jains celebrate their high holidays by indulging in the festival of forgiveness. It is not just a celebration. It is a duty. It is performed ritually and publicly on the last and 8th day of Paryushan – the most auspicious of the sacred season for introspection.