Republican Del. Derrick Evans, issued a statement Saturday that he takes full responsibility for his actions, adding he deemed it best for him to resign to “focus on my personal situation and those I love.” 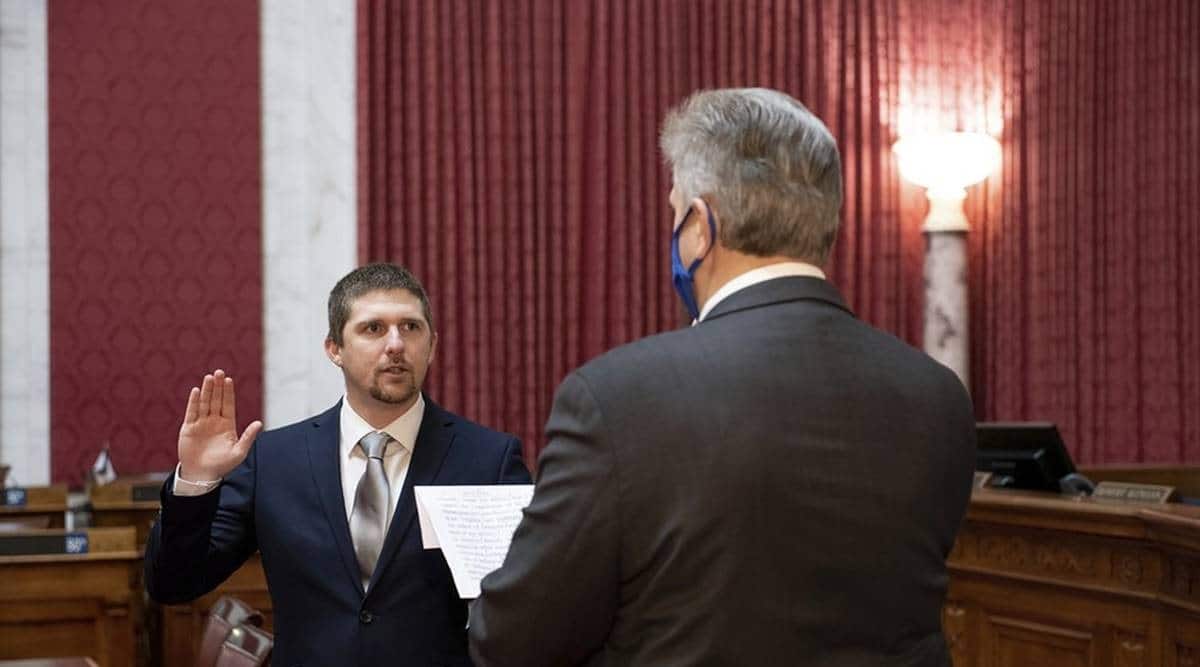 A West Virginia state lawmaker resigned Saturday as he faces charges of entering a restricted area of the US Capitol after he livestreamed himself with rioters.

Evans, 35, appeared before a federal judge in Huntington, West Virginia, on Friday after being arrested. If convicted, he faces up to a year and a half in federal prison for two misdemeanor charges: entering a restricted area and disorderly conduct.

Evans issued a statement Saturday that he takes full responsibility for his actions, adding he deemed it best for him to resign to “focus on my personal situation and those I love.”

“I take full responsibility for my actions, and deeply regret any hurt, pain or embarrassment I may have caused my family, friends, constituents and fellow West Virginians,” said Evans.

“I hope this action I take today can remove any cloud of distraction from the state Legislature, so my colleagues can get to work in earnest building a brighter future for our state. And more importantly, I hope it helps to begin the healing process, so we can all move forward and come together as ‘One Nation, Under God,’” he added.

In a since-deleted video that was widely shared online, Evans is seen clamoring inside a jampacked Capitol building doorway, trying with others to push his way inside. He hollers along with other loyalists of President Donald Trump and fist-bumps a law enforcement officer who let them in.

After pushing into the building, video shows, Evans milled around the Capitol Rotunda, where historic paintings depict the republic’s founding, and implored others to not vandalize artwork and busts. Some of the pieces were later vandalized.

Evans joined and encouraged a crowd unlawfully entering the Capitol after days of telling his 30,000 Facebook followers to “Fight For Trump” in the nation’s capital on Wednesday, FBI agent David DiMarco wrote in a criminal complaint.

Before the rush to the Capitol, Evans posted a video in which he said, “They’re making an announcement right now: If Pence betrays us you better get your mind right because we’re storming that building,” the charging documents state. He then laughs and adds, “I’m just the messenger, so don’t be hating on me.”

Legislators from at least seven other states traveled to Washington, D.C., to back Trump and demonstrate against the counting of electoral votes confirming Democrat Joe Biden’s victory.

It’s unknown if any other elected official joined the attack on the Capitol.

“In announcing his resignation, Delegate Evans said he accepted responsibility for his actions and apologized to those he’s hurt,” Hanshaw said in a statement. “In this time of overheated, hyperbolic political rage, I think that’s a good first step for us all to take right now.”

Evans lost in the 2016 House of Delegates primary as a Democrat, finishing sixth among seven candidates in the district. He refiled as a Libertarian for the 2016 general election but finished last among five candidates. He switched to the Republican Party for the 2020 election, received 50% of the vote in the GOP primary for the 19th District in June and was the leading vote-getter for two seats in November with 37% of the vote.

Under state law, the governor will fill Evans’ seat with one of three replacement options nominated by a local Republican Party committee.