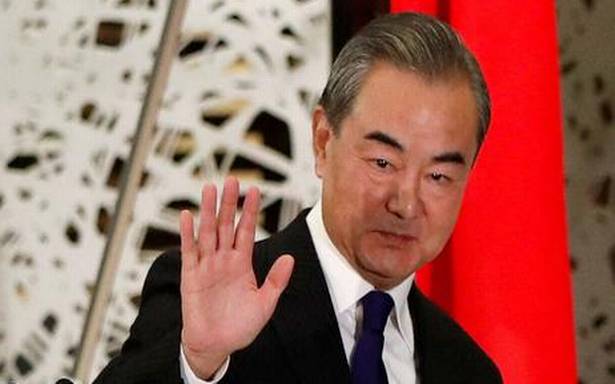 Mr. Wang’s visit to Maldives, meanwhile, coincides with a heightening “India out” campaign being mounted by the political opposition

The Chinese Foreign Ministry said on Thursday Mr. Wang would on January 4 begin his five-nation trip in eastern Africa, visiting Eritrea and Kenya, before travelling to the island nation of Comoros, followed by Maldives and Sri Lanka.

“China and the two countries are traditional friendly neighbours and important partners with close high-level exchange, deep practical cooperation, broad common interests, and the same or similar positions on many regional and international issues,” he said. “We will work together with the two countries to build on the momentum generated by commemorating the anniversaries of diplomatic relations to deepen traditional friendship, enhance political mutual trust, strengthen solidarity against COVID-19, upgrade practical cooperation including under the Belt and Road Initiative framework, and increase coordination and cooperation in international and regional affairs.”

Official sources in Colombo indicated the visit would focus on ongoing projects and investments, while Colombo and Beijing try to iron out some differences. It would entail a possible MoU in the maritime sector, sources said. A senior official at the Beijing-based Sri Lankan Embassy told The Hindu “it is a courtesy visit”.

During the pandemic, China has provided substantial assistance to Sri Lanka by way of emergency loans, totalling over $1 billion, a currency swap for $1.5 billion, and vaccines with Sinopharm accounting for over 80% of the vaccines administered in Sri Lanka.

In February 2021, Sri Lanka cleared a Chinese energy project in three islands off Jaffna peninsula, not far from the Tamil Nadu coast, following an international bid. However, Colombo suspended it after India raised concern and offered an alternative grant for the same. Further, the Colombo-based Chinese Ambassador’s recent visit to Jaffna has drawn criticism from the Tamil leadership.

In May, the passage of the Colombo Port City Economic Commission Bill, governing the China-backed Colombo Port City project worth $1.4 billion, triggered considerable resistance with government critics describing the project as a “Chinese enclave” within the island nation.

The most recent controversy involved Sri Lanka rejecting a shipment of organic fertilizer imported from China due to reported “contamination”. The Chinese side responded by blacklisting Sri Lanka’s state-owned People’s Bank, while the Chinese company has sought $8 million in compensation and sued Sri Lanka in a Singapore court over the deal. Colombo has maintained this was a “commercial dispute” that didn’t impact diplomatic ties. It is, however, likely to figure on the agenda during the minister’s trip.

Mr. Wang’s visit to Maldives, meanwhile, coincides with a heightening “India out” campaign being mounted by the political opposition, accusing President Ibrahim Mohamed Solih’s government of “allowing Indian military presence” in the island nation, a charge that the ruling administration has denied.