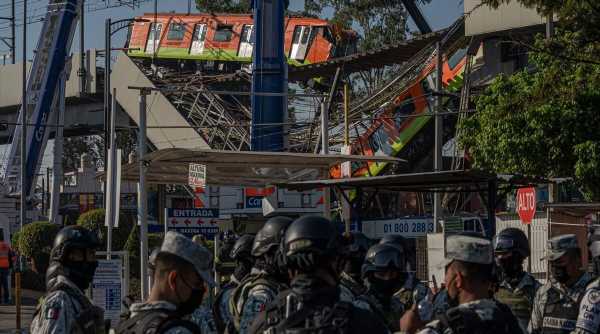 Local residents had expressed concern about the structural integrity of the overpass, including cracks in the concrete, after a powerful earthquake devastated parts of the city in September 2017. The capital had been bracing for the disaster for years.

Ever since it opened nearly a decade ago, the newest Mexico City subway line — a heralded expansion of the second largest subway system in the Americas — had been plagued with structural weaknesses that led engineers to warn of potential accidents. Yet other than a brief, partial shutdown of the line in 2014, the warnings went unheeded by successive governments.

On Monday night, the mounting problems turned fatal: A subway train on the Golden Line plunged about 50 feet after an overpass collapsed underneath it, killing at least 24 people and injuring dozens more.

The accident — and the government’s failure to act sooner to fix known problems with the line — immediately set off a political firestorm for three of the most powerful people in Mexico: the president and the two people widely believed to be front-runners to succeed him as leaders of the governing party and possibly, the country.

The crash occurred at 10.22 pm on one of the newest stretches of track in the subway system, the Golden Line, also called Line 12, which was inaugurated in 2012. Nearly a quarter of a million passengers ride Line 12 every day, officials said.

Local residents had expressed concern about the structural integrity of the overpass, including cracks in the concrete, after a powerful earthquake devastated parts of the city in September 2017.

Workers hired to operate and maintain the subway system issued over a dozen complaints to transport authorities over the years, which they said were all ignored.

“This could have been avoided,” said Homero Zavala, a representative of a union of Mexico City’s subway workers. “If us workers were really listened to by this administration, a lot of problems would be avoided.”

But authorities ignored the workers’ calls for proper maintenance, he added, and some of those who spoke out — including Zavala — were fired.

Harrowing video of the accident showed the overpass suddenly collapsing in a shower of sparks, sending up a cloud of debris as one of the train cars smashed into a vehicle on the road below.

Emergency workers scrambled to access the tilted train cars lying amid tangled wires and twisted metal, eventually pulling dozens of people from the wreckage and transporting more than 70 people to hospitals with injuries. Most of the 24 people who were killed in the crash were found dead on site by rescue crews, officials said.

Desperate relatives flocked to the scene for news of their loved ones, while others scoured city hospitals and searched for any scrap of news on social media in hopes of finding their family members.

“I’m looking for my son,” Marisol Tapia told reporters through sobs. “I can’t find him anywhere.”

“I went to all the hospitals and they say he’s not there,” she told reporters gathered at the crash site Tuesday. “The metro wasn’t built on its own — this flaw has been there for a long time and no one did anything.”

A total of 79 injured people had been taken to hospitals, three of whom later died, according to Claudia Sheinbaum, the mayor of Mexico City. Among those hospitalized were three minors.

President Andrés Manuel López Obrador of Mexico has been criticized for imposing strict fiscal austerity measures that have starved the capital of the money it needs to rebuild the troubled subway system while splurging on pet projects, including nearly 1,000 miles of railway stretching across southern Mexico.

Soon after taking office, he also stopped the construction of a half-built airport that a rival party had started to build for Mexico City. Even though the government had already spent billions of dollars on the airport, López Obrador scrapped it to start building another airport at a different location, reimagining the project in his name.

Those investments have come at the expense of Mexico’s more urgent infrastructure needs, including fixing Mexico City’s water problems and its subway system, a key mode of transportation for the sprawling capital’s population of nearly 22 million.

In the aftermath of Monday’s disaster, two of López Obrador’s closest allies came under immediate scrutiny: Sheinbaum, the capital’s mayor, and Marcelo Ebrard, the foreign minister who was mayor when the new subway line opened. Both are presumed to be top contenders to run for the presidency when López Obrador, limited to one term, steps down in 2024.

The new line, which serves the working class neighborhoods in the capital’s southeast, was built by Ebrard, who was mayor of Mexico from 2006 to 2012. He was accused by critics of rushing to finish construction before his term concluded in an effort to bolster his political legacy. Troubles emerged immediately.

In just the first month after the line was inaugurated, there were 60 mechanical failures on trains or on tracks, according to local media. Trains had to slow down over elevated stretches of track, because engineers feared derailments. About a year later, the city was forced to temporarily shut down part of the $2 billion line for repairs.

Then after a powerful earthquake struck in 2017, Mexico City transport authorities reported “a structural fault” in one of the metro line’s supporting columns, which had affected its ability to support heavy weight.

In 2018, senators from the opposition Institutional Revolutionary Party called for Mexico City authorities to inform Congress about irregularities in the funding of the subway line’s expansion. In an official party document, the opposition lawmakers called the Golden Line a “symbol of corruption and the misuse of public resources that prevailed during that administration.”

The lawmakers cited a congressional inquiry into the faulty line which found that “the modifications to the basic engineering, to the original layout with the change of underground stations to elevated stations, severely affected the technical operating conditions” of the subway line.

Residents living near the scene of the accident said government workers had fixed the column shortly after the earthquake. But they expressed doubt about the quality of the reconstruction, after seeing how many shutdowns and maintenance issues the line had over the years.

Hernando Manon, 42, was walking home from work Monday night when he felt a tremor and heard a loud crash a few hundred yards up the street.

“There was a rumbling and then sparks. The lights went out, and we didn’t know what happened. Then we heard the sirens,” Manon said, standing just a few hundred yards from the site of the accident. “As we approached, we realized that the subway had collapsed.”

Families rushed to the scene, he said, hoping to find their loved ones and yelling at the police demanding to be let through the cordon they had erected around the wreckage.

A 2018-2030 Master Plan for the subway system detailed major backlogs to the maintenance of tracks and trains and warned that trains could be derailed on the Golden Line unless major repairs were undertaken. It is unclear whether those needed repairs were ever carried out.

Since becoming mayor of the capital in 2018, Sheinbaum, who is closely aligned with the president’s pursuit of austerity, has presided over cuts to spending on the subway system.

For a year, the city did not appoint a director of infrastructure maintenance for the subway system. Sheinbaum only filled the role last week.

The metro has been causing troubles for Sheinbaum for years. In 2019, several people were injured in accidents caused by mechanical problems on subway escalators, prompting the city to investigate more than 400 escalators in stations across the capital.

In March 2020, one person was killed and at least 41 others were injured when two subway trains collided in Mexico City. Then in January, a fire ripped through the subway’s headquarters in downtown Mexico City, killing a police officer and sending 30 others to hospital.

At a news conference Tuesday, both Sheinbaum and Ebrard faced harsh questioning from reporters. Publicly, at least, the two political heavyweights presented a united front.

“We are in agreement to get to the bottom of this and work together to find the truth and know what caused this incident,” Sheinbaum said.

1969: The subway system in Mexico City was inaugurated. It was the pride of a nation, but in recent years it has become a symbol of urban decay.

1975: A train collision at the Viaducto station killed 31 people and left more than 70 injured.

2012: Line 12, known as the Golden Line, opened. Still the newest in the system, the line has always had problems. Trains running over elevated parts of the track had to slow down for fear they might derail. The city eventually suspended service on a large part of it.

2015: A collision between two trains left 12 people dead. After that crash, the German-based company TÜV Rheinland was hired to examine the circumstances that might have caused it and suggest improvements to technology.

2017: A powerful earthquake hit Mexico in September. There was concern about the integrity of the elevated tracks and support columns on the Golden Line.

2020: In March one person was killed and at least 41 others were injured when two subway trains collided. The next month at the Misterios station, a railway coupler — a mechanism used for joining train cars — fractured.

2021: In January, a fire ripped through the metro’s downtown headquarters, killing a police officer and sending 30 others to hospitals with smoke inhalation. Six subway lines were temporarily knocked out of service. Last month, another of the capital’s 12 subway lines shut down after a track fire.