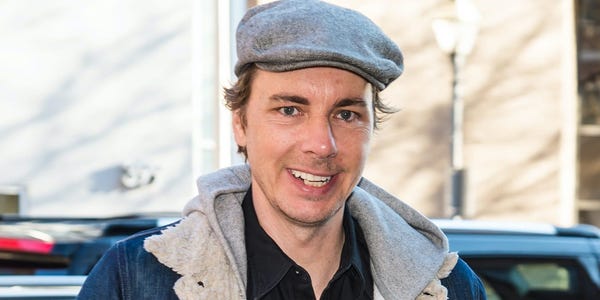 Actor and podcast host Dax Shepard said that he relapsed after being sober for 16 years.

Shepard previously became sober in 2004 after struggling with an alcohol and cocaine addiction. He said that he started using prescription opioids eight years ago after he was prescribed them by doctors for a series of injuries.

During an episode of his "Armchair Expert" podcast that was released on Friday, Shepard said that after he had surgery for four broken ribs he sustained in a motorcycle accident in August, he was prescribed the painkiller Vicodin.

Shepard said on the podcast that he was on Vicodin "all day" for eight weeks after he was prescribed the prescription opioid following his latest motorcycle-related injury.

He said that he later became addicted to the prescription painkiller pills.

During the latest "Armchair Expert" episode, Shepard said that he didn't initially view taking the prescribed painkillers as a problem, but that he felt "shady."

"I feel shady, but I don't feel like this is a problem," he said of being prescribed pain medication. "I don't desire more when the thing is over."

After his August motorcycle accident injury, Shepard said was taking eight 30-milligram pills of Vicodin every day and keeping his addiction a secret from everyone.

"I know that's an amount that's going to result in a pretty bad withdrawal," he said on the podcast. "And I start getting really scared, and I'm starting to feel really lonely. And I just have this enormous secret."

According to the Centers for Disease Control, anyone who takes prescription opioids can become addicted to them, and as many as one in four patients who receive long-term opioid therapy in a primary care setting struggle with addiction to the drug.

The "Parenthood" actor posted a photo on Instagram on Friday announcing his most recent podcast episode, which is called "Day 7." The title references the seven days that he had been sober at the time he recorded the podcast on September 21.

An episode I hoped I'd never have to record, but one I felt I owed to all the beautiful Armcheries who have been on this ride with me for the last couple years. This was Monday, say today is 11.

"An episode I hoped I'd never have to record, but one I felt I owed to all the beautiful Armcheries who have been on this ride with me for the last couple years," he captioned the post.

In Friday's podcast episode, Shepard said that he was "high" on prescription painkillers while celebrating his 16-year sobriety anniversary.

"I was high at the meeting having people tell me they admire my sobriety," he said. "It was the worst thing in the world."

Shepard said he told his wife, "The Good Place" star Kristen Bell, with whom he shares two children, earlier this month about his relapse. He said in the podcast that he worried about the impact "coming clean publicly" would have on his wife.

"Kristen doesn't deserve for the next six months for every f—— interview she does to be, 'Oh, Dax relapsed,'" he said during the podcast episode.

Bell has previously spoken about her husband's sobriety. In a March 2019 interview with People, she said that she spoils him more on his "sober birthday" than his actual birthday.

"I'm very happy he was born, so I celebrate his birthday, but I'm extraordinarily [happy] that he has stayed sober because that's what allows me to have him in my life as a husband and as a father," she told People.

Shepard said during the podcast episode that he has since sought help and has been clean for seven days at the time of the podcast's recording on September 21.

"I now feel again like my life's going to get better," he said.

Representatives for Dax Shepard did not immediately respond to Insider's request for comment.