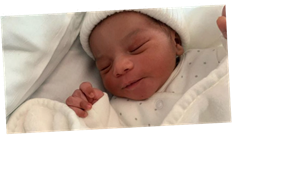 Marcel Somerville has released a new song called Apple of My Eye, which is a beautiful homage to his new baby boy, Roman.

In the single Marcel, 35, makes promises to his new arrival that he'll always care for baby Roman, as he wishes for his son to take on the strength of his mother.

Marcel sings: "I’ll take you anywhere that you wanna go, I’m down.

"I’m proud just to watch you grow, You gonna be strong like mama, Be a king like your daddy".

The single, which features cover art that is an image of Marcel's fiance Rebecca Vieira, is the latest single from the Blazin Squad member after he released a number of projects in 2020.

Speaking exclusively to OK! online, Marcel said: "I can't put into words how happy I am. I wrote the song for my son but it's also paying tribute to my beautiful fiance who is simply the best mother."

In the picture posted on Saturday evening little Roman, who is now two weeks old, can be seen all snuggled up asleep, wearing a white baby grow and matching white beanie.

The star captioned the post, writing: "I can’t believe little man is gonna be a week old tonight! Time and flown by.

"Thank you to everyone that’s sent messages of Congratulations and Love we really appreciate it."

The proud father then shared the news that his offspring already has his own social media page, adding: "Now he’s officially been revealed to the world, follow him on @romansomerville_ to watch him grow".

The couple also recently revealed their tot's sweet name alongside a snap, which sees the bundle of joy wearing an adorable white all-in-one-sleep suit with grey polka dots on and a smiling grey cloud motif sewn onto the front.

Written under the cloud are the words: “Hello new here”.

In the caption, Marcel revealed he and wife-to-be Rebecca had chosen to name the name Roman.

Marcel then continued: “My Heart!!! Pregnancy is a journey and this past 9 and a bit months have been totally worth it!