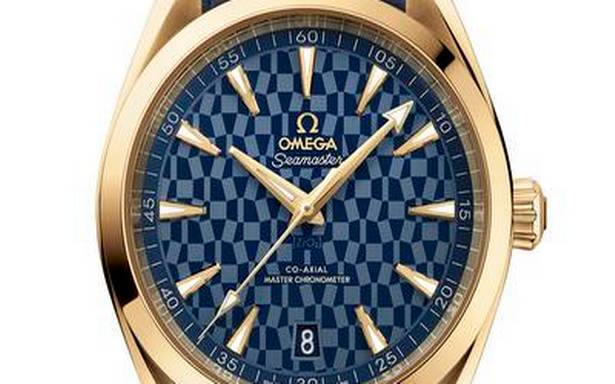 The brand’s 29th outing as Olympic timekeeper sees innovation for sports like Speed Climbing, and a new gold watch, the Seamaster Aqua Terra

When it comes to sports timekeeping, Omega is always on the ball. An Olympic event is filled with data – the most obvious being the time in which a race is won. But as sensors proliferate, get smaller and in the case of some sports can even be attached to the athletes themselves, the amount of information generated has grown. Alain Zobrist, CEO of Omega Timing talks about how the nature of time-keeping has changed at the Olympics. “We’ve got motion sensors and positioning systems. We’re using computer vision and artificial intelligence in these systems already but for sure this is going to be developed in the future. Where we will end up in a couple of years is very difficult to say, but without a doubt we will certainly make a couple of steps forward for the Winter Olympics in Beijing, a little more than six months from now, and the Olympic Games in three years in Paris.”

Tokyo on the wrist

While the focus has always been on ‘the final result’ — the records that may be broken, the gap between first and second place and the increasing exactitude (currently measurable down to the millionth of a second) of an athlete’s performance — Zobrist explains how data is changing the way athletes will train. “So far, we had a very good understanding of what happens at any start of the race as well as any finish of the race, and now with our new sensor technologies we’ll be able to understand also what happens in between, during the entire performance of an athlete.” Consequently, we’ll be able to see how athletes got to their results. Where did they lose time, where did they gain time? Where did they lose or gain points?” This data, which will allow athletes and their teams to train smarter, will also be used by broadcasters in their on-screen graphics.

Biel-based Omega has brought innovation to each new Games since its association began in 1932. That includes devices that ‘film time’ like the Magic Eye (or the Racend Omega Timer), which has seen its photoelectric cell count increase to four for the 2016 games. This year, the excitement is around Speed Climbing, one of five new sports being introduced at Tokyo. About it, Zobrist says, “It’s going to be the second sport now after swimming, where the athletes are going to be able to stop their times themselves,” with the help of touchpads at the end of the course.

It’s still athletics that is the most challenging sport to track. Multiple athletes on the track at once requires additional coordination between the time keepers on the field, the timing room and the data handling room.

Finally, what does this innovation spell for Omega, the watchmaker better known for being on the wrist of James Bond? Zobrist explains, “It really is two different worlds today. Mechanical or watch-making is fundamentally different from timekeeping of sports events. But the roots are the same, with the stop watches that Omega used in 1932.” And there is a sharing of values – “precision, accuracy and attention to detail”.