Rebel Wilson is getting slammed for her new clothing brand!

“Our rich collection of hoodies and sweatpants are made with the finest French Terry and are sustainably manufactured with love in Turkey using environmentally friendly dyes.”

People have taken to social media to call out Rebel for having a small size range, including TikTok user Destiny Ann who put it amazingly in a video:

“I don’t understand how someone who is plus size for the majority of her career, the majority of her life — someone who knows how hard it is to be fat, to shop for clothing and actually find it in your size — I don’t understand how someone with that background, that knowledge, can release a brand that only goes up to an XL. People’s biggest argument for this is always like, ‘Oh, it’s so expensive to, you know, have so many size ranges.’ It’s Rebel Wilson. She got money. It’s so disheartening.”

the irony of rebel dropping a clothing line that she wouldn’t have even been able to shop at a few years ago ???? #rebelwilson #plussizefashion #sizeinclusivefashion #greenscreen

Lacey-Jade Christie also took to TikTok to say she was “floored and flabbergasted by the fact that it only goes up to an extra-large”:

“I know she’s not fat anymore, but the fat community supported Rebel Wilson for her whole career. She profited off of being a fat person, a fat character.”

♬ Why You Asking All Them Questions – Spoken Reasons

The criticism didn’t end there. On Twitter, social media users continued to slam the Pitch Perfect star for not offering extended sizes with her brand. See the reactions (below):

“Still sniggering at Rebel Wilson creating a clothing line that doesn’t cater to plus sizing. Absolutely wild scenes, but not surprising. Former fat people can sometimes end up being the worst when it comes to fatphobia and/or exclusion. Chile…”

“Imagine if women the size you used to be could buy and wear your clothing? Short memory huh?”

“Who even wants to buy $300 hoodie set from REBEL WILSON? When has Rebel ever given the world a fashion moment worthy of her having her own overpriced line? Lol she’s a fool for excluding her main fanbase. She said ‘I’m not one of you anymore, so I don’t know you.’”

“Rebel Wilson making a clothing line that isn’t size inclusive when she was plus size for most of her life and career…. Wow. Just wow.”

It’s an incredibly disappointing situation — especially when she knows how hard it is for people in the plus-size community to find clothing. So what does she have to say to all these disappointed fans?

Following the backlash, Rebel took to her Instagram Story on Tuesday evening to address the lack of size inclusivity with R&R Club. She wrote on top of a picture of herself in the matching set:

“In success we are planning on doing more colours and sizes for R&R CLUB.”

The comedian then added they “are experimenting with this limited capsule collection of only two pieces in limited sizes.” Yeah… That still doesn’t make it OK to not have more of a size range in the first rollout of the line. You’re literally admitting all the plus-size customers are an afterthought. 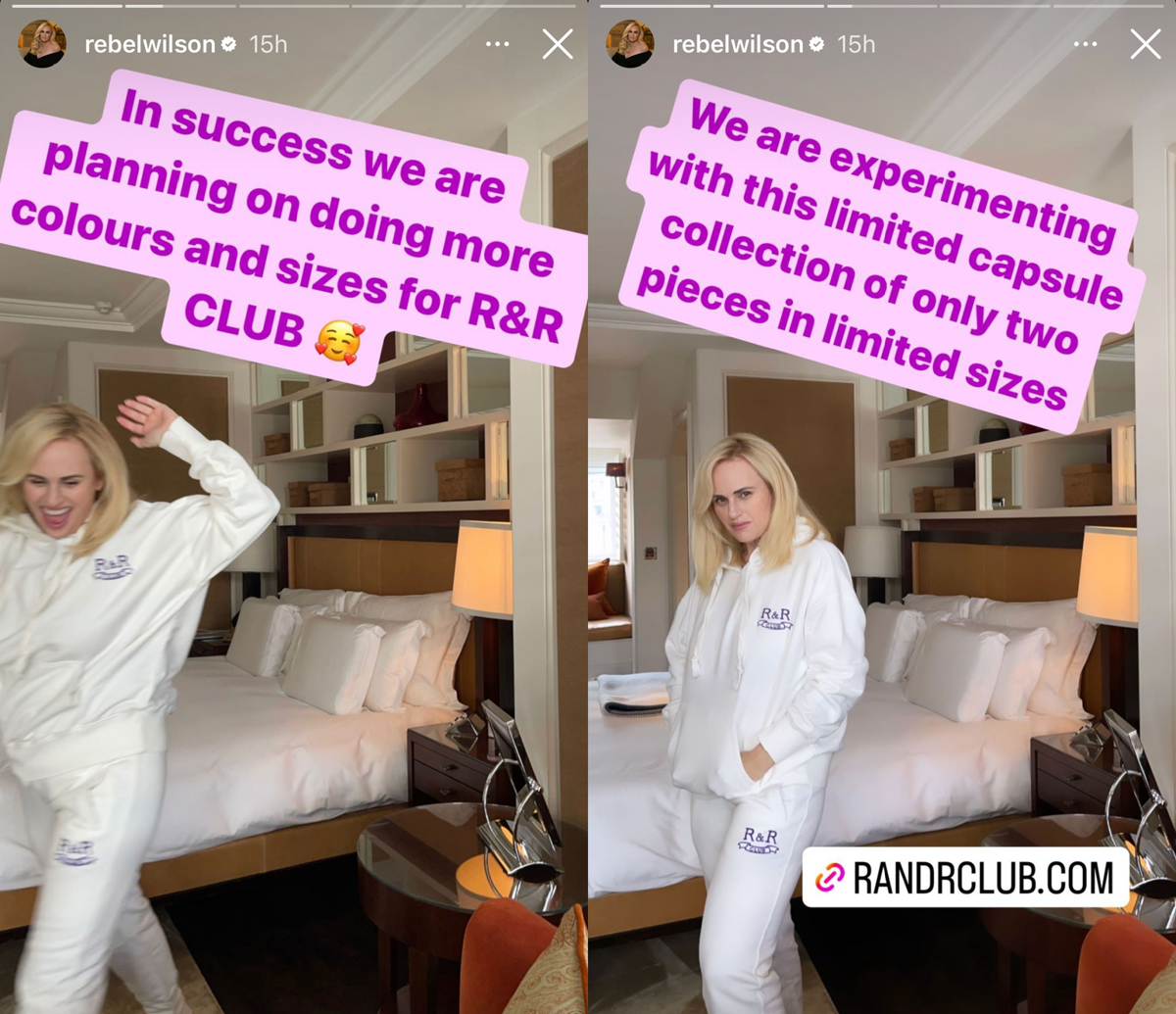 She also asked her followers to make some suggestions on the “colours or sizes” they’d be “interested in for sweats” before announcing that the items were “almost SOLD OUT.” 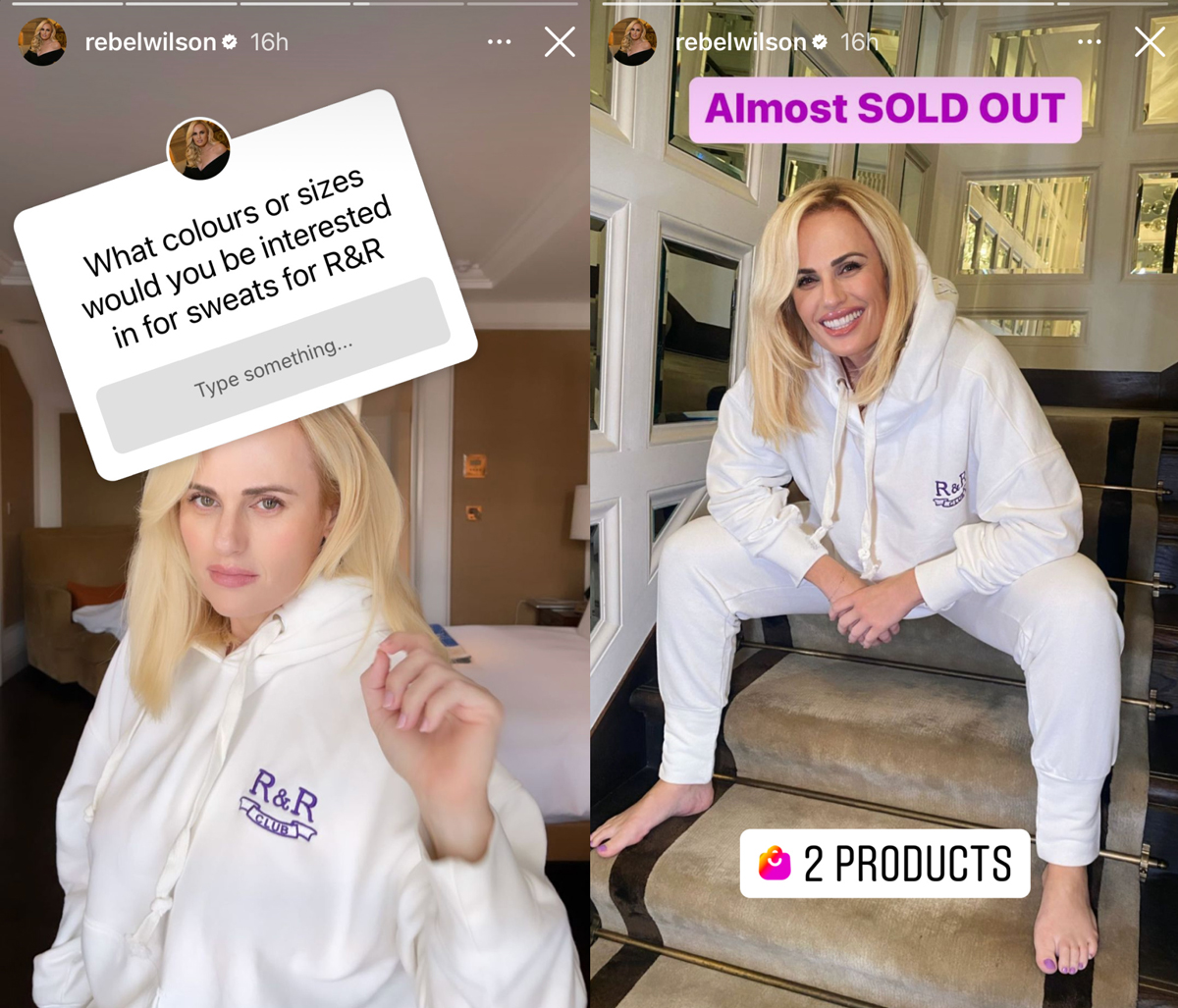 Hopefully, that means more sizing options will be available soon — but Rebel did not mention when she and Ramona plan on exactly launching more sizes. So we’ll have to see if she follows through with her promises. And whether potential customers have been too turned off to bother at this point.

Reactions to the backlash, Perezcious readers? Were you disappointed in the lack of plus-size options from Rebel’s line? Sound OFF in the comments below!