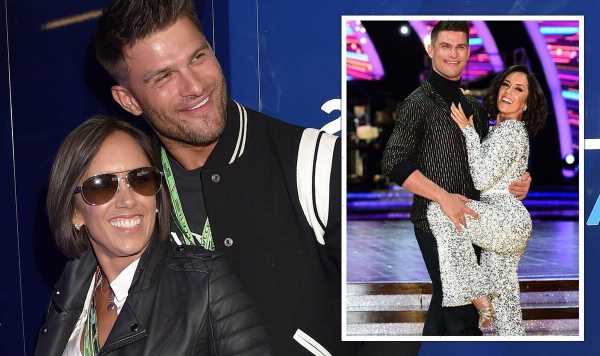 Janette Manrara,38, and Aljaž Škorjanec, 32, candidly revealed that they both want to be parents but are leaving the details “up to the universe”. The couple worked on Strictly Come Dancing together for eight years and are now launching into new careers as Aljaž begins training and Janette heads It Takes Two.

Janette and Aljaž both left the Strictly dance floor in the past year.

Janette left first in 2021 as she took on hosting duties for Strictly spinoff It Takes Two which she now co-hosts with Rylan Clark.

Aljaž left a few months later to follow his dreams of acting and is currently in training.

The busy couple admitted to Prima that they do hope to one day start a family but are avoiding putting any deadlines on the idea.

Janette said: “We believe in leaving it up to the universe and taking whatever we’re blessed with.

“We want to be parents and can’t wait for the day that comes, but we’re not putting pressure on how, when and in what capacity that will be.”

She also noted there’s potential in their future to be co-presenters as they would “love” the opportunity.

Janette revealed: “We both enjoy presenting as we’re natural entertainers and we love talking to people. One of our favourite sayings is. ‘When opportunity and preparation meet, it equals success.’

“So it’s important for us to prepare and hone our skills so that if we ever do get offered our own show, we’ll be ready.”

The couple originally met in 2010, when the American dancer moved to London and happened to find herself in the same rehearsal studios as Aljaž.

Janette admitted she wasn’t looking for a relationship, but Aljaž was determined and undeterred by her consistent denials.

The Slovenian claimed he knew he would marry Janette one day just hours after first meeting her.

They joined Strictly Come Dancing together in 2013 and worked as professional competitors on the show for eight years.

However, during lockdown, Janette had a realisation that she wanted to explore a different side of the show, and was soon offered the opportunity to host It Takes Two.

Once his wife left, Aljaž decided he also wanted to shift his focus away from the Strictly stage.

Throughout their life in the Strictly limelight, fans have been constantly enthralled by whether they would be extending their family.

In an interview with OK!, Aljaž said he wants to focus more on being a “family man” and supporting his wife now that he’s off television.

He also noted that the constant public prying into their lives and the pressure for them to have children has not been ideal.

Aljaž said: “We’ve been in the public eye for 10 years and sometimes you don’t realise how much of yourselves you’re going to have to give. You can’t stop people asking things.”

Strictly Come Dancing continues on Saturday at 7pm on BBC One.

The December issue of Prima is on sale from November 3.