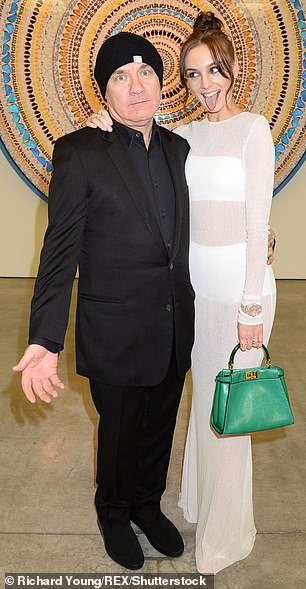 So close: Damien with Sophie at the opening of his new show

Since separating from his long-term partner Maia Norman in 2012, controversial artist Damien Hirst has had a string of impossibly thin and young waifs on his arm – all of whom, of course, claim to be attracted to his personality and not just his £315million fortune.

But just when friends began to think he’d never settle down again Damien, 54, may yet surprise them all by proposing to current girlfriend Sophie Cannell, a ballerina less than half his age.

The art world is abuzz with whispers that an announcement could be imminent after Sophie, 26, was seen wearing a huge diamond ring on her left hand after helping him set up his new show at London’s White Cube gallery.

She was seen wearing it during a lunch break they enjoyed together at the nearby Wolseley restaurant. The pair were wearing identical denim ensembles and matching beanie hats but Sophie’s outfit was accessorised with a major piece of new bling.

Sophie is not a typical Hirst girlfriend. Apart from the fact that she has real talent, having trained as a professional ballerina, Damien appears to be much more devoted to her than the others. The pair live together with their three French bulldogs Pablo, Chapo and Blanco and are inseparable.

Damien spent last Christmas with Sophie in Phuket, showering her with dozens of gifts. She usually wears a chunky twisted gold and diamond costume jewellery ring on her left hand. But those who spotted the couple at the Wolseley say the new one looks more like a traditional engagement ring with one large stone set on a band. They began dating early last year and live at Damien’s vast £40million London home. If they do marry one day, she will become a stepmother to Damien’s three children, the oldest of whom is just two years her junior.

When I asked a spokesman if it was an engagement ring, she said: ‘These days I don’t know which one the wedding ring finger is. It’s just a ring he’s given her.’ 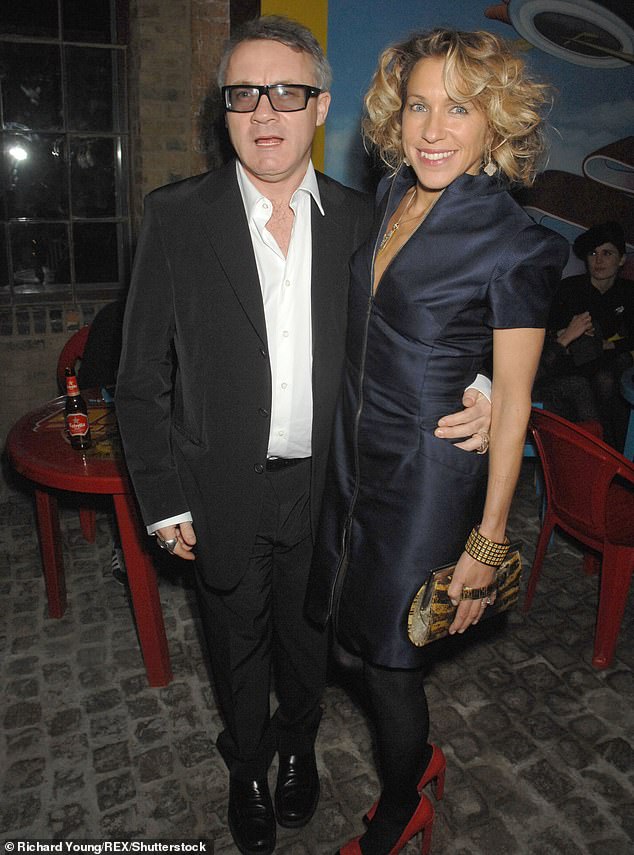 Watch out Carrie Symonds – you’re not the only pin-up in Parliament. New girl on the block Ellie Lyons is my crush this week… and most of Westminster’s, too, for that matter.

Though she is known as ‘the sexy Spad’ by some old duffers in Downing Street, Cambridge-educated Ellie is even more brainy than she is good looking.

Pictured above with Gavin Williamson, whom she worked with when he was Defence Secretary, she moved to No 10 to help with Boris Johnson’s leadership campaign.

But outside of the office she’s no political nerd.

Her best pal is Kimberley Garner of Made In Chelsea fame, and they are often seen posing up a storm in London’s most exclusive venues. Their favourite holiday spot is St Tropez.

Forget a carriage clock or case of wine – when John Humphrys retired from the Today programme after 32 years, his colleagues bought him… an orchard for his back garden.

John’s Radio 4 colleagues paid for a selection of special Welsh heritage trees and arranged for them to be planted at his country home in Wales while he was in London recording his farewell shows. They even got Tony Kirkham, head of Gardens and Horticulture Services at Kew Gardens, to do the honours. John, 76, was almost in tears at his leaving do when he was shown a video of them being planted.

He told his pals he’d always longed for an orchard, not to mention enough free time to enjoy his garden.