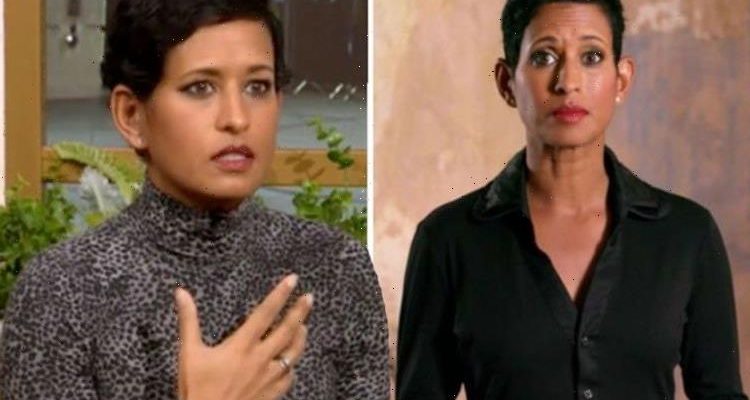 Naga Munchetty expressed her shock at some of the cases she discovered during a chat with Morning Live presenters Gethin Jones and Sara Cox today. One case in particular which startled the 46-year-old was somebody who put a false claim in about their wedding rings.

The presenter began by telling the hosts that £1.2 billion worth of fraudulent claims are made in the insurance industry every year.

After a clip from the show was aired, the presenter agreed with an investigator who said there were some “stupid” people whose fraudulent claims hadn’t been thought through properly.

“You get some amazing stories in Claimed and Shamed,” she spilled.

Detailing one, Naga said: “There was one who claimed their wedding rings were stolen.

“It’s just the stupidity of some of these people,” she laughed. “And trying to pull the wall over peoples’ eyes.”

Naga went on to say another person had claimed they had accidentally cut their laptop in half with an electric saw.

“It’s so annoying when that happens,” she joked.

On what had shocked her the most, the presenter said: “The laptop was pretty bad.”

She went on to point out the extreme lengths some had gone to to “plan” an insurance scam.

Naga explained that those who were specfic about details about an incident could be scammers.

On how people could know if they are a target, she said: “I think if it seems too planned.

“I’ve been in a car accident and you’re in shock aren’t you?

“You’re just trying to think, ‘What has just happened here?’ You don’t automatically think, ‘How much can I claim?’

“If someone all of a sudden is going, ‘Well you were going 42 miles an hour etc’, you think, ‘Hold on you’ve got this a little bit too organised’.”

Naga went on to urge people to “always keep a record” about a potential accident.

“Keep calm because it’s easy to be bullied I think,” she warned.

During the first episode, viewers also witnessed a window cleaner being caught out after he claimed he couldn’t work due to an injury despite being seen riding a bicycle.

Claimed and Shamed continues tomorrow at 10am on BBC One.