Editors note: Deadline’s Read the Screenplay series debuts and celebrates the scripts of films that will be factors in this year’s movie awards race.

Inspired by his wife and longtime creative collaborator Frances McDormand’s blistering stage performance, writer-director Joel Coen wanted to find his own way into William Shakespeare’s enduring tragedy Macbeth with a key goal in mind for his film adaptation, Apple and A24’s The Tragedy of Macbeth.

“I tried to make a film as much for people who don’t go to see Shakespeare as for anybody,” Coen says.

Working independently from his usual filmmaking partner and brother Ethan, and absent any longstanding personal ambition to adapt Shakespeare to the screen, Coen instead first saw the cinematic possibilities in the four-century-old play while watching McDormand perform Lady Macbeth at the Berkeley Repertory Theatre in 2016 with her signature emotional honesty and intensity. “I kept thinking if I could get closer to this with a camera, it will be even more psychological and exciting,” he recalled.

To craft the screenplay, Coen consulted his longtime friend Hanford Woods, a Shakespeare professor, to pour over every line with him, delve into the histories of various productions, consider critical and historical analyses and examine Shakespeare’s own sources for the story. The filmmaker even challenged some of the text’s most timeless lines of dialogue. “At some questions [Woods] would say ‘You’re joking,’ and I would say ‘I’m not joking,’” recalls Coen. “No matter how much you read Shakespeare, there are certain things that can remain a little bit opaque, and some of the words can be ambiguous, so I wanted to understand as much as possible how everything was intended.”

Coen ultimately chose to proceed with a largely untrimmed version of the already famously concise and fast-paced play. “Doing Macbeth without the language seemed to be missing probably the most important part,” Coen says. “It’s the melody of the piece and, for me, it had to be in the foreground.” By focusing on illuminating some of the more challenging language through visual context, “people would be able to enjoy the richness of the language.”

He also recognized the noir elements that suffused the source material. “It seems to me The Tragedy of Macbeth prefigured many of the 20th century tropes of hardboiled fiction. It’s about a couple plotting a murder. That’s James M. Cain,” says Coen. “And with all the witchcraft, it’s also a horror movie in its way. It has all these affinities with genre cinema, and it has some similarities to things I’ve done with my brother.”

Among his major alterations including shifting the setting into a more ambiguous, undefined time and place, and focusing on a late-middle-aged, more experienced and shared-history-laden incarnation of the Macbeths embodied by Denzel Washington and McDormand over the more traditional young and power-hungry models.

The Tragedy of Macbeth has already scored mentions as a film of the year by AFI and the National Board of Review, the latter of which named it Best Screenplay. Among its honors, Washington this week received a Lead Actor nomination this week from the SAG Awards. The film, which hit theaters December 24, begins streaming globally on Apple TV+ on Friday. 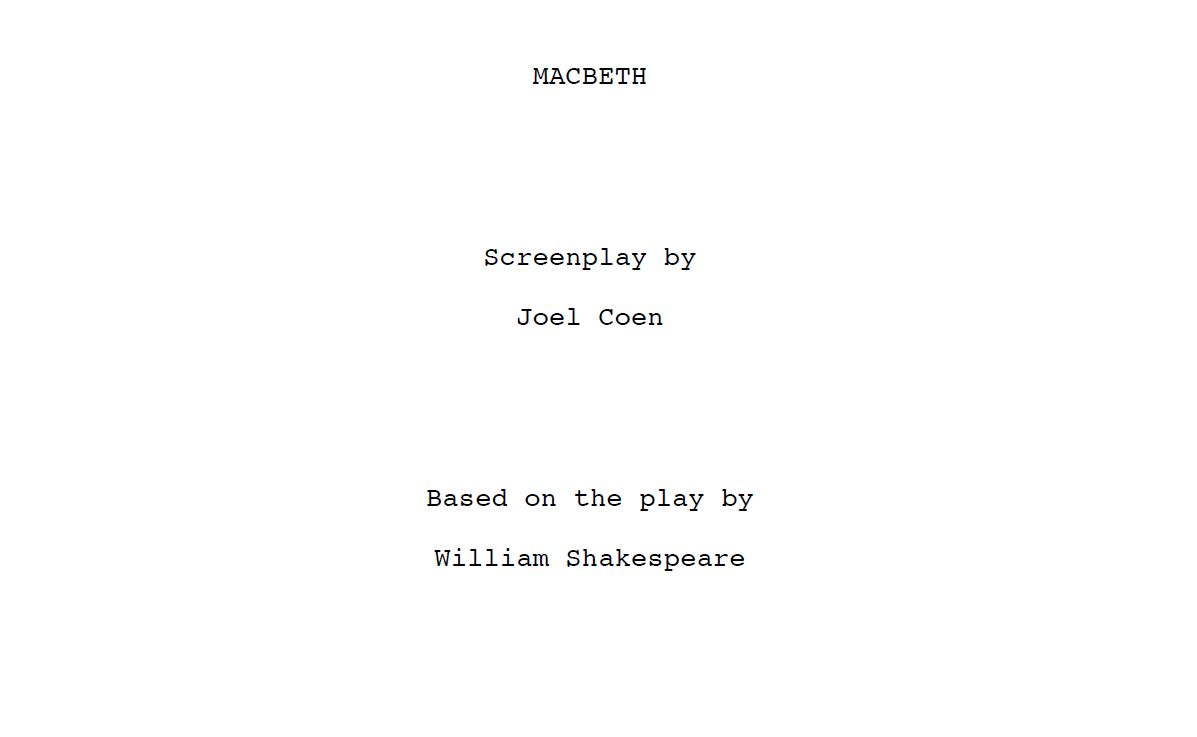 ‘King Richard’: Read The Screenplay That Aces The Venus And Serena Williams Story

‘Dune’: Read The Screenplay For Denis Villeneuve’s Revival Of A Sci-Fi Epic Penned With Jon Spaihts And Eric Roth

‘Being The Ricardos’: Read The Screenplay For Aaron Sorkin’s Snapshot Of Lucille Ball-Desi Arnaz Love Story