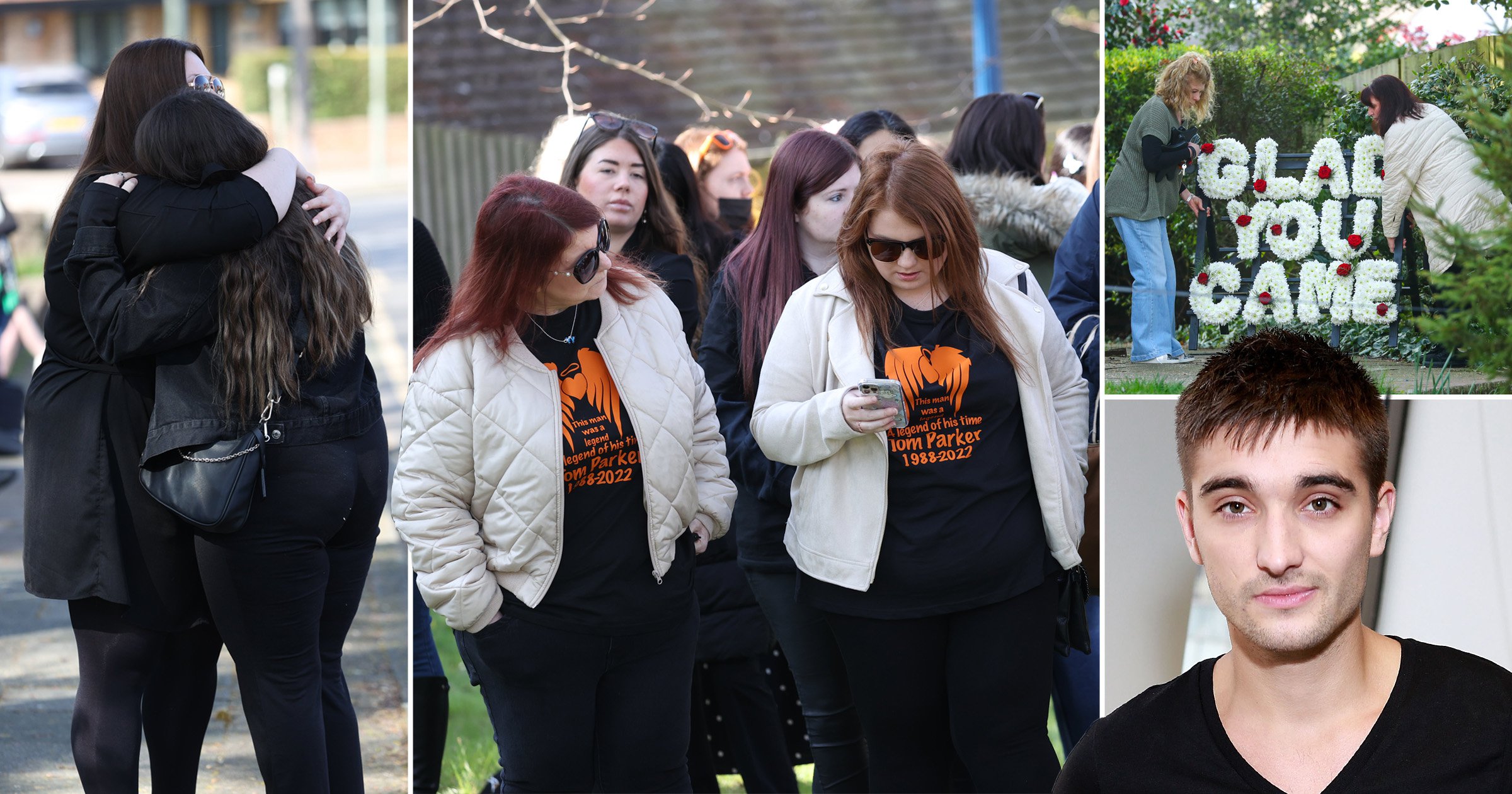 Crowds of fans lined the streets outside The Wanted star Tom Parker’s private funeral after his death at the age of 33.

The singer’s funeral is set to take place on Wednesday at Petts Wood, South London with his widow, Kelsey Parker, inviting his grieving fans to pay their respects.

Kelsey had said it ‘would be beautiful to have everyone line the route as we head to our private service.’

She added that people would be welcome to stand outside of the church for the duration of the private service which was relayed on screens.

Parker, who was also a father-of-two, died on March 30 after battling a stage four brain tumour.

Outside St Francis of Assisi church, flowers spelled out the words ‘Glad You Came’, the title of The Wanted’s 2011 hit that went to number one in multiple countries.

Other flowers spelling out the word ‘Daddy’ adorned the side of the carriage while a flowered sign that spelled the word ‘Tom’ in red roses was attached to the front.

Some of his devastated fans were seen wiping away tears as they gathered with other mourners.

Ahead of the service, receptionist Chloe Mayne, a self-professed ‘super-fan’ of the late singer, told PA: ‘It was amazing seeing him [perform live]. It’s horrible that I saw him at the O2 and then two weeks later he died.

‘The day he died it really hit me. To be fair I don’t think anyone was expecting it that quickly, I thought he’d have at least another Christmas and maybe next year.’

Mayne added: ‘Most shows he did one song on the tour but at the O2 he did two because I think his kid was there – he did Gold Forever and Glad You Came.

‘He was sitting in a chair but it was amazing, it looked like he was having the time of his life.’

Parker disclosed in October 2020 that he had been diagnosed with stage four glioblastoma and had begun radiotherapy and chemotherapy.

The musician spent the remainder of his life raising awareness of brain tumours and money for research to fight them.

Glioblastoma is a grade four brain tumour. It is an aggressive type of cancer that forms from cells called astrocytes that support nerve cells and can occur in the brain or spinal cord.

Following Parker’s diagnosis, he underwent 30 rounds of chemotherapy and 30 radiotherapy sessions, as well as physiotherapy to rebuild the strength in his left side after the tumour caused it to weaken.

In February, he went to a private hospital in Spain to receive treatment for his tumour.

In the weeks before his death he had performed on stage with his bandmates as part of their much-delayed reunion tour.

Parker’s fellow bandmates, Ed Sheeran, Spandau Ballet’s Martin Kemp and Howard Donald of Take That were among the figures from the world of music who paid tribute to the singer after news of his death broke.

Fans also bid farewell at a memorial in Newcastle created for the late star.

The Wanted’s song Gold Forever also re-entered the charts for the first time in 11 years.

Parker and Kelsey had been married since 2018 and welcomed their son, Bodhi, in October last year. Their daughter, Aurelia Rose, was born in 2019.

If you or someone you care about has been diagnosed with cancer, Macmillan can offer support and information.