Larry David is no fan of Donald Trump — and he’s made a secret of that. The “Seinfeld” creator and “Curb Your Enthusiasm” star has made it very clear that he’s not on the Trump bandwagon on multiple occasions, including making scathing remarks about the former president in an April 2020 interview with The New York Times. “You know, it’s an amazing thing. The man has not one redeeming quality. You could take some of the worst dictators in history and I’m sure that all of them, you could find one decent quality,” David said.

The star also poked fun at the businessman after an episode of “Call Your Enthusiasm” saw David’s character, a heightened version of himself, don a red “Make America Great Again” baseball cap as a way of stopping people from speaking to him. Trump didn’t quite seem to get the joke though and appeared to take the reference as a compliment. He shared the clip to Instagram in February 2020 with the caption, “TOUGH GUYS FOR TRUMP.”

That led David to voice his disapproval of not just Trump, but also his supporters. Jimmy Traina shared a clip on Twitter of a January 2020 interview David did with Michael Kay, where Kay asked David if he was worried about “alienating” Trump fans with the joke. “Alienate yourselves. Go and alienate, you have my blessing,” he hit back. “No. I could give a f**k.” 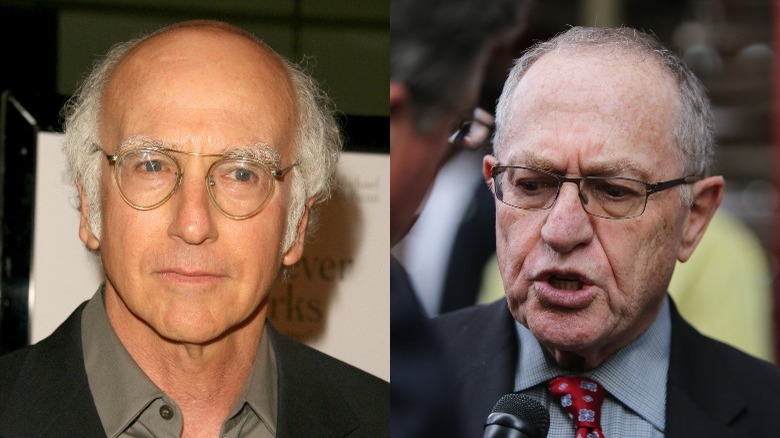 Though Larry David and Alan Dershowitz once appeared to be good friends, things have changed after David called out the big-time lawyer due to his ties to former President Donald Trump.

According to Page Six, the two had words in a grocery store after David told Dershowitz they could no longer speak because he spotted him with his “arm around [Mike] Pompeo,” which the “Seinfeld” creator called “disgusting.” Mike Pompeo was the director of the CIA as well as the Secretary of State under Trump. Dershowitz explained he was with Pompeo because he was a former student at Harvard, but David wasn’t having any of it. “It’s disgusting. Your whole enclave — it’s disgusting. You’re disgusting!” he hit back.

Dershowitz confirmed the heated interaction to the outlet, saying David “screamed” and “yelled” at him to the point he “was worried that he was going to have a stroke.” He then took a jab at David, saying, “While he was writing bad jokes, I was helping to bring about peace in the Middle East. What has he done?” Yikes.

But it sounds like there’s still chance for a reconciliation. Dershowitz said he’d be willing to “extend a hand of friendship if [David] wants to talk about any of this,” but added, “I won’t get into a screaming match with him. If he wants to scream, he’ll have to scream alone.”

David doesn’t yet appear to have publicly addressed the incident.