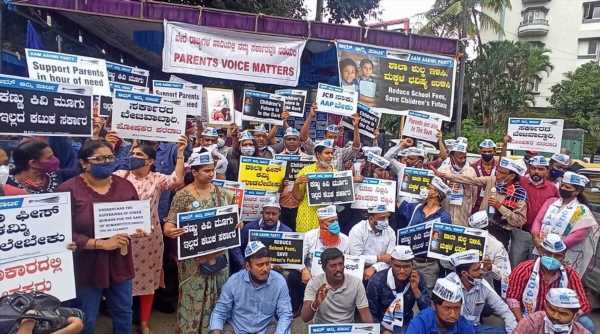 The protesters also demanded the government to take measures to improve the infrastructure and other facilities at government schools to ensure free and quality education to all at least up to the age of 14 as per the Right to Education Act. 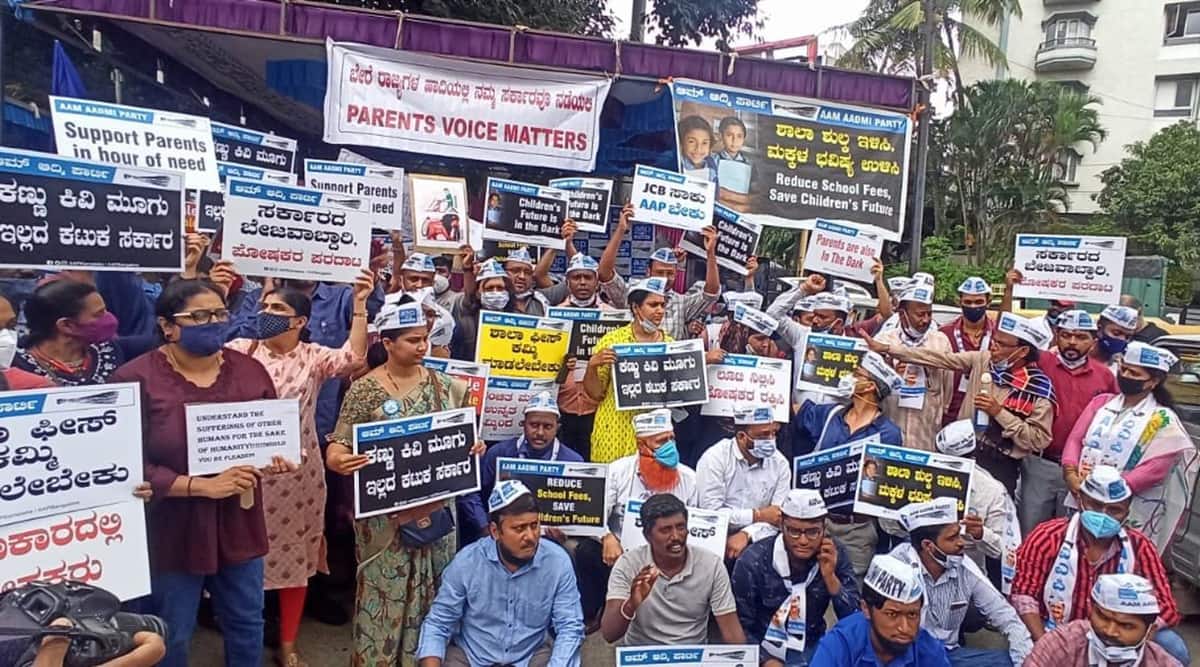 Accusing the BJP-led Karnataka state government of being “callous and indifferent” towards parents forced to pay “exorbitant” school fees during the pandemic, the Aam Aadmi Party (AAP) Wednesday held a protest in Bengaluru demanding government intervention into the matter.

“Repeated lockdowns have caused lakhs of parents to lose jobs, incomes, businesses and savings. How do we expect them to pay exorbitant school fees now? The government not taking any measure to support the education sector in the state shows how callous and indifferent they are, leading to an educational crisis,” AAP Karnataka Convener Prithvi Reddy said.

The protesters also demanded the government to take measures to improve the infrastructure and other facilities at government schools to ensure free and quality education to all at least up to the age of 14 as per the Right to Education Act. “The BJP government has failed miserably to do so and must be held accountable,” Reddy added.

Earlier last week, the Karnataka High Court had directed private schools in the state to provide a 15 per cent discount in fee for the academic year 2020-21, taking note of facilities being underutilised due to academic sessions held only online due to the pandemic.

The court had passed the order while disposing of the petitions by school managements that questioned the state government’s order (dated January 29, 2021) that restrained all categories of private unaided schools from collecting more than 70 per cent of the tuition fees collected in the previous academic year (2019-20).

Citing this, Reddy accused former Primary and Secondary Education Minister S Suresh Kumar of “sidestepping” the matter by asking private managements to reduce school fees by 30 per cent directly then. “Such a step can never be considered a relief as it had then affected the lives of teachers. The government clearly failed to strike a balance between parents and management amid the growing crisis then and are yet to correct such blunders,” he remarked.

Meanwhile, Romi Bhati, state observer of the party demanded the government to provide financial assistance to parents by announcing scholarships to children or by paying the due salaries to teachers of all schools. “This would avoid private management passing on the burden back to parents and a fee waiver can be achieved in a just manner,” he suggested.

Further, protesters urged the government to publicise a weekly dashboard to record enrolment and attendance at schools to ensure gaps in learning outcomes and teaching are mitigated. The establishment of ‘school management committees’ comprising all stakeholders “empowered” to contribute towards making key decisions was also sought during the protests held in the capital.

“While several circulars, including those related to discounts on school fees, are issued by the Education Department, none looks into the fact if they are implemented. As parents, we are fed up of knocking doors to ensure such basic works are carried out without fail,” a parent said, calling for more transparency in the department now headed by Primary and Secondary Education Minister B C Nagesh.