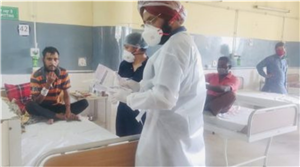 Amid the raging pandemic, Punjab’s 17 districts out of 22 do not have a single ICU bed (Level-3) in government hospitals, leaving the critical patients at the mercy of private hospitals, who often face criticism of being extortionist.

Even though the government claims to have spent Rs 1,000 crore on healthcare in the previous fiscal year, not a single ICU bed was added to the 17 districts.

With the case load expected to peak in the first or second week of May, Chief Minister Amarinder Singh on Monday ordered 20 percent increase in bed capacity in the next 10 days. He directed the Health and Medical Education departments to get stadiums, gymnasiums and other such places ready to house patients. Tented camps should be set up, and gyms/halls should be converted into L2 and L3 facilities, he said.

Amarinder’s directive came as Health Minister Balbir Sidhu said the situation was grim with only 300 beds now available at L3 facilities in the state. Hospitals are getting overwhelmed, he added.

Medical Education Secretary DK Tewari said that from 343 in the first week of April, ICU bed capacity had increased to 770 and would be further enhanced to 900 by the end of the week. Total number of oxygen beds will be increased from 1500 to 1800 this week and further to 2000, he added.

Health Secretary Hussan Lal said 2000 beds will be added to strengthen the L-2 and L-3 capacity in government and private hospitals. While 900 beds would be added to Government Medical Colleges Patiala, Amritsar and Faridkot, 542 will be added to private medical colleges, namely, PIMS, Gian Sagar, Adesh, DMC, and CMC. The district hospitals will get another 300 L-2 beds, while 250 beds would be placed at a temporary hospital near the Bathinda Refinery.