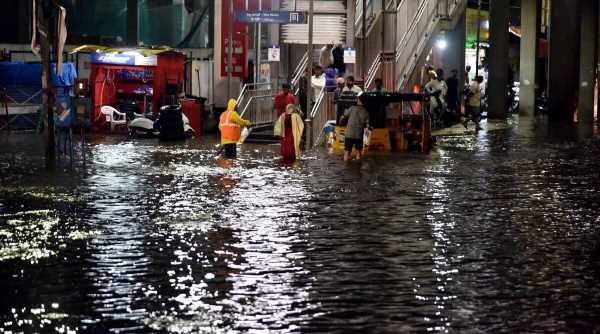 The India Meteorological Department’s Hyderabad Center has predicted more rainfall till October 14. The IMD has forecast thunderstorms accompanied by lightning at isolated places in a few districts of Telangana for Saturday as well. As a short but intense spell of rainfall lashed parts of Hyderabad as well as the State Friday night, low-lying areas and streets were inundated in no time. Rains brought traffic to a standstill and caused major inconvenience to the residents. Instances of two-wheelers, auto-rickshaws being washed away were reported. Images of inundated shops and restaurants emerged.

In about 90 minutes, several areas around Saroornagar, LB Nagar, Malakpet, Santoshnagar, and Falaknuma recorded over 10 cm of rainfall. However, some of the adjoining parts of the city like Malkajgiri, Nampally, Alwal, Jubilee Hills, Yousufguda, Kukatpally, Gachibowli, etc received only negligible amounts of rainfall.

The India Meteorological Department’s Hyderabad Center has predicted more rainfall till October 14. The IMD has forecast thunderstorms accompanied by lightning at isolated places in a few districts of Telangana for Saturday as well. “You can expect heavy and short spells of rainfall but it may not be as intense as Friday night,” Naga Rathna said.

According to IMD, Saroornagar recorded the highest downpour in the state, at 15 cm. This was followed by Shadnagar (Rangareddy district), Kalwakurthy (Nagarkurnool district), and Maganoor (Narayanpet district) which recorded 10 cm of rainfall.

IMD Director in-charge K Naga Rathna told Indianexpress.com that parts of the state and the state capital received intense spells of rainfall under the influence of an east-west wind shear (a rapid change in wind velocity or direction) from east-central Arabian sea to the south-west Bay of Bengal. She said more rains could be expected as the southwest monsoon is yet to fully withdraw from the region. Also, a system of low pressure is slowly developing and we are monitoring it, she added.

A motorist who reportedly fell into an open drain in Chintalkunta of Vanasthalipuram during the rain and was washed away had a miraculous escape. He was traced three kilometers away at Karmanghat. He sustained minor injuries. When contacted over the phone, Vanasthalipuram ACP K.Purushotham Reddy said a rescue operation was initiated by police and GHMC staff upon receiving the information but the man escaped safely before he could be rescued. He was traced and sent home after giving first-aid. Police are verifying his claims, he said.

Open manholes and drains have been turning into death traps for pedestrians and motorists in recent times. On September 25, during a similar spell of heavy downpour, a 35-year-old software engineer fell into an open drain and died in Manikonda. In another incident, a 54-year-old man had also fallen into an open nala at Quthbullapur and gone missing and later found dead.

While the offset of southwest monsoon is yet to be announced for the state, Telangana has received 39 percent excess rainfall from June 1 to September 30, according to IMD-Hyderabad. The state received 1044.7 mm rainfall during the period against the IMD’s long pending average (LPA) of 751.9 mm. Ten of the 33 districts have recorded large excess rainfall while 15 districts received excess rainfall and the remaining 8 districts received normal rainfall. The districts which received the highest actual rainfall are Adilabad (1600.4mm), Nirmal (1564.0mm), Kumarambheem Asifabad (1486.4mm), Mahabubabad (1418.7mm), and Rajanna Sircilla (1386.2mm)