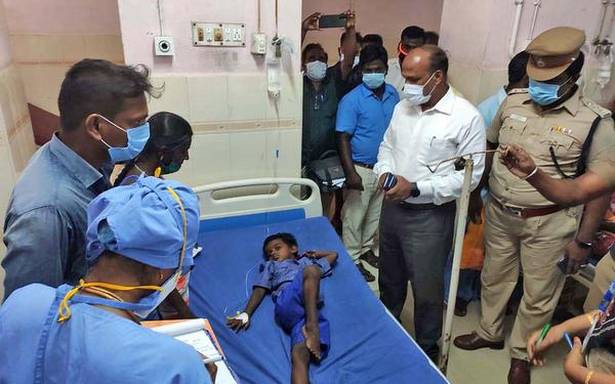 Samples of food from anganwadi centre in Thiruchopuram sent for testing

As many as 17 children attached to an anganwadi centre in Thiruchopuram here fell sick after eating the midday meal served in the premises on Monday.

They were rushed to the Cuddalore Government General Hospital after they complained of dizziness and were kept under observation after a dead lizard was found in the food served to them.

According to official sources, the lizard was found in the food, prepared for 20 children.

The meal was served around 11.30 a.m. and two children complained of nausea and vomiting after consuming it. They were rushed to the hospital.

On information, Cuddalore Collector K. Balasubramaniam visited the hospital to inquire about the health of the children. The children are now in a stable condition.

Samples of the food had been collected and sent for tests, he said, adding that appropriate action would be taken if the anganwadi staff were found to be guilty.