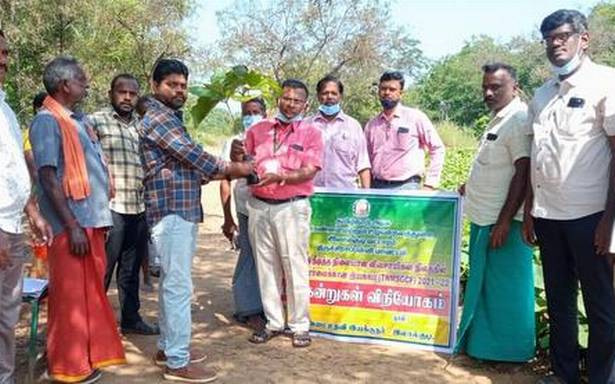 The Agriculture Department has planned to distribute about 2.04 lakh tree saplings to farmers in Tiruchi district under the Tamil Nadu Mission on Sustainable Green Cover on Farmlands, a new agro forestry scheme launched by the State government in 2021.

The Department has started the distribution of saplings to farmers and already about 70,000 saplings have been distributed so far. The remaining saplings are ready for distribution at the Forest Department’s Extension Centre nursery at P. K. Agaram, an official of the Agriculture Department said. The department was keen to distribute the saplings quickly so that farmers can plant the saplings taking advantage of the monsoon/agriculture season now.

Under the initiative, farmers were being given 50 tree saplings an acre for border plantation and 160 saplings for low intensity planting. “Farmers are advised to raise the saplings as border crop if they raise crops such as paddy. Low density planting can be taken up by farmers raising horticulture and floriculture crops. In such crops, the saplings can be planted and raised as an inter-crop,” an official of the department explained.

Saplings of high timber value species such as teak, red sandal, mahagony, vembu and pungan were distributed to farmers under the scheme. In Tiruchi district, teak saplings are distributed mostly to farmer beneficiaries. Teak sheds its leaves and will not compete with the main crop, the official said explaining the preference for teak.

Farmers get the saplings free of cost and are also eligible to get ₹7 per sapling a year in the second and third years of its growth.

Farmers who wish to avail themselves of the scheme, can apply through the Uzhavan App and register their name, phone number, land survey number and other relevant details. Agriculture officers will contact the applicant and visit their field for verification taking photos of the field and uploading the same online along with the chitta, Aadhaar details and bank account passbooks. “Farmers can still apply and benefit from the scheme,” the officer said.