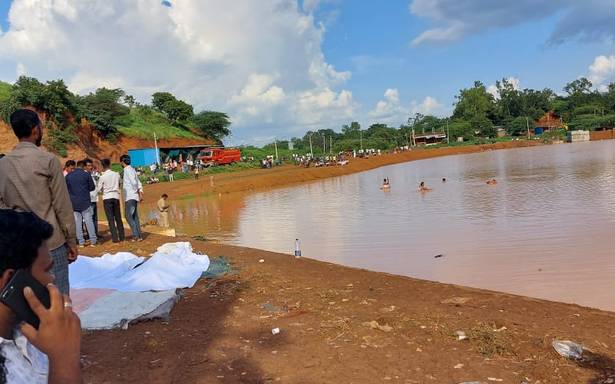 They went there to visit Godivada dargah

In a tragic incident, four youth from Hyderabad were drowned in a tank at Godivada tank near a dargah near Godivada in Bidar district of Karnataka.

The incident took place on Sunday in Humnabad Taluq of Bidar district in neighbouring Karnataka.

According to police, a family from Borabanda has arrived on a pilgrimage at the Godivada dargah in Humnabad taluk of Bidar district at 8 a.m.

The pilgrims, who visit the dargah have a bath in the tank. The family stopped at the tank and the children – Sayyad Akthar (17), Md. Junaid Khan (19), Md. Fateh Khan (18) and Sayyad Junaid (16) – went to the tank for a bath and drowned one after the other before the eyes of their parents and relatives.

The police rushed to the spot and swimmers were roped in. Bodies were retrieved after a search in the tank. They were handed over to the parents after conducting postmortem at the local government hospital.

All of them did not know swimming and that the tank was full of water due to heavy rains that took place recently, the police said.

Humnabad police registered a case and are investigating.