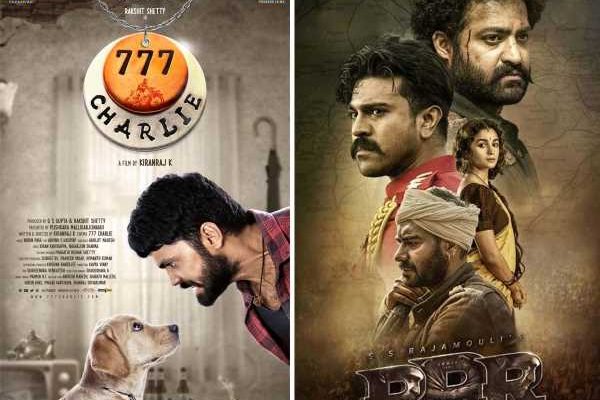 777 Charlie Vs RRR IMDB ratings: 777 Charlie starring Rakshit Shetty and Charlie is  running successfully at the box office and is enjoying a terrific run after taking a decent start.  Rakshit Shetty starrer is riding high on positive word-of-mouth and is one of the most loved films in recent times. 777 Charlie is directed by Kiranraj K and the movie explores the affectionate bond between a lonely man and a dog. The movie has a lot of fun and emotional moments.  It was released on 10th June and  received a thumbs up from both critics and the audience alike.  The movie is now eyeing to hit Rs 100 cr  mark.

Very few movies have made their way to the IMDB’s top 250 Indian films this year.  According to the latest report, 777 Charlie got an IMDB rating of 9.2/10 with 9000 votes and it has beaten SS Rajamouli’ magnum opus RRR starring mega Power Star Ram  Charan  and Young Tiger Jr NTR.

From Tollywood, the big budget drama RRR, which is bankrolled by DVVV Danayya under the banner of DVV Entertainment stood at 169th place in this prestigious list of IMDB ratings. Rakshit Shetty starrer 777 Charlie is on 116th position in this list.