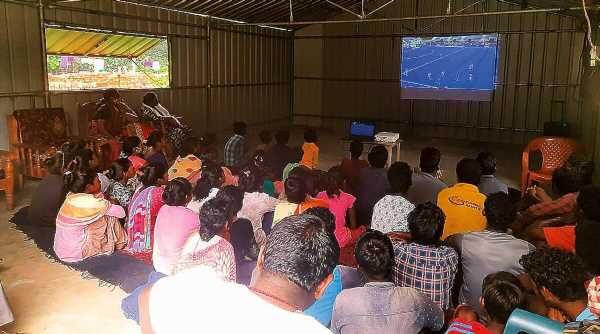 As the women’s hockey team made history and almost landed a podium finish in Tokyo, geographies away, a Jharkhand village celebrated a game that is often their way out of hardships. 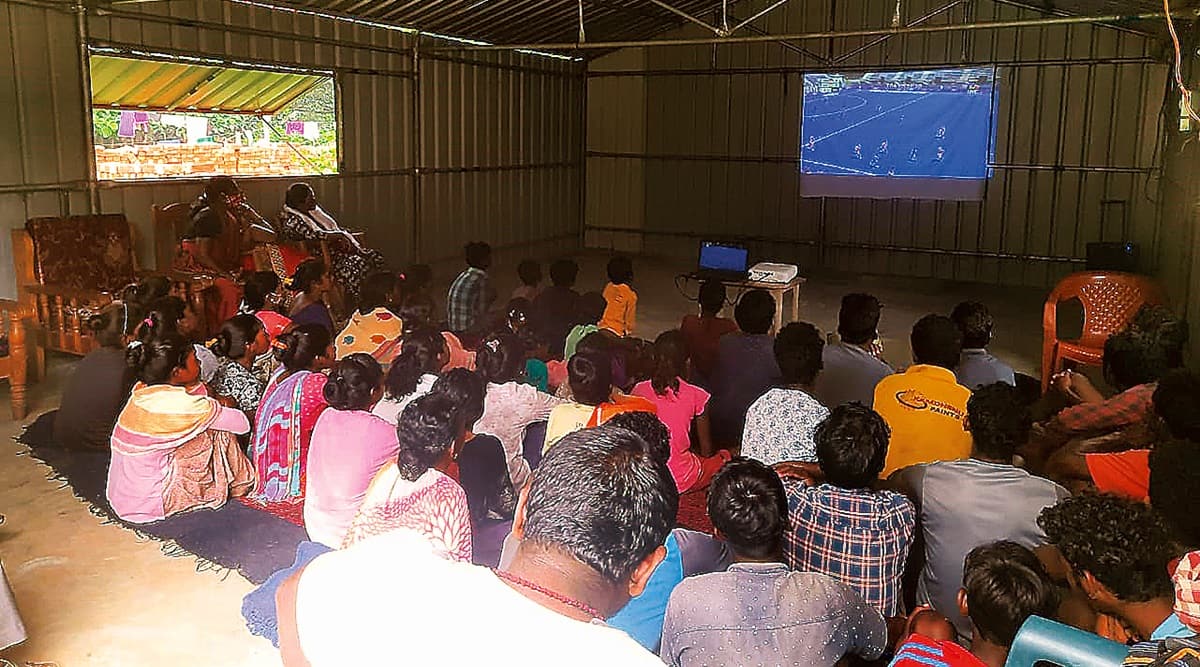 Early Friday morning, as the Indian women’s hockey team walked onto the astroturf at the Oi National Stadium in Tokyo for their semifinal match against Great Britain, thousands of kilometres away, people trickled into a hall lined with asbestos sheets and took their place on a rug in front of a projector.

Hesal, a tribal village in Khunti district of Jharkhand, listed as Naxal territory, seems a long way from even the state capital. On days such as these, when the rains churn the mud roads, the distance is even longer. Yet, even with its non-existent roads and crushing poverty, the tribal village has sent at least 12 hockey players to the state and national teams. Nikki Pradhan, the defender in the Dream 16 team that played in Tokyo, grew up here, playing with bamboo balls and sticks.

Hesal is home to about 60 families, 80% of them tribals. The village has only one health sub-centre that mostly stays shut and no school, with most children walking down to nearby Pilaul.

It was this walk to school that was to change Nikki’s life, along with an other children of her generation. At the Pilaul Middle School was “Mahato sir”, Dasrath Mahato, who played hockey for Bihar from 1978 to 1981 and who joined the school in 1988 as Assistant Teacher. “He wasn’t a sports teacher but every game period, he encouraged us to play hockey. He trained anyone who showed an interest, including me,” recalls Shashi, 32, Nikki’s sister, elder to her by five years, who played hockey for Bihar and Jharkhand, and now works for the Railways.

“We would play with bamboo sticks and bamboo balls. Sir took us to tournaments in villages, including with men. After Class 8, those of us who played the game reasonably well were sent to the Bariatu Girls’ Hockey Center in Ranchi, a boarding school for hockey players. Before we left for Ranchi, he handed Nikki and me food and money,” says Shashi.

Mahato, who is now general secretary of the Khunti unit of Hockey Jharkhand, says, “Around 77 of my students, including the Pradhan sisters, have made it to several top level circuits… It is a matter of great pride.”

He has a regret, though. “Khunti still lacks basic facilities for training. Simdega (the district from where Salima Tete, the only other Jharkhand player in the Olympics team, hails) has 13 day centres for hockey, two boarding centres for women and three for men, where education, training and lodging are taken care of. Khunti has only one boarding centre each for men and women, apart from eight day centres,” Mahato says. The district has two astroturfs, but they are mostly under water during the rains.

But every such challenge only spurred Hesal’s girls and boys to come out stronger.

After playing national-level hockey for 10 years, from 1998-2004, Hesal girl Neelam Mundu, 32, took to teaching the game. In 2017, she was recruited by Tata Trusts for its programme to “professionalise grassroot-level hockey” in India. Since the pandemic began, Mundu says, she has not been able to travel much to hold lessons.

“I get Rs 8,000 a month to teach hockey. When I took to the game, we thought if we played well, we could at least get into a school where our food and accommodation were taken care of, where we at least didn’t have to worry about getting married off,” she says.

One of Munda’s students is Junita Pradhan, a Class 8 student of a private school in Khunti. From 7 to 9 every morning, Junita walks barefoot with her hockey stick to the Khunti Sports Shop, where Mundu coaches her and 25 other girls and boys. The hockey stick cost her Rs 400, so she had to shelve her plans of buying shoes. On Friday, she skipped practice to watch the Olympic semifinal.

While sad the team lost, she says, “I saw Nikki didi play. I entered the sport due to her.”

Standing beside his under-construction house, Nikki’s father Soma Pradhan, a former constable with the Bihar Police, is a proud father, but it took him long to get here. “I wasn’t happy about the girls playing this game. I did not know much about it. People used to tell me that no one would marry my girls if they played hockey.”

Soma points out that Hesal does not have toilets still while power is erratic and the mobile network patchy. “Even while we were watching the match, we missed some part of it,” he says, adding that in June, a power failure meant he got news of his daughter’s selection for the Olympics two days later.

On Friday morning, surrounded by cheering villagers, he felt his heart weighing down as his daughter leaned against her hockey stick after an agonisingly close match. “But at least the girls played well,” he says.