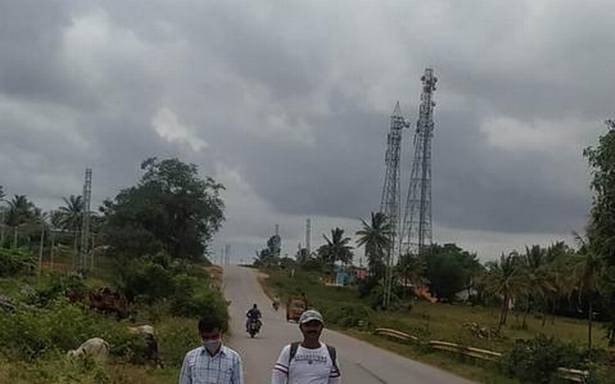 He gave whatever he had saved to his family

Vivekananda H.K., 53, is walking across Karnataka; his aim is to ‘revive human values’. What is unique about his journey is that he is travelling without a rupee in his pocket and has vowed not to touch currency, literally.

In the last 247 days, he has covered nearly 7,500 kilometres on foot. He has been carrying just a backpack and a bottle for water. He has interacted with thousands of people along the way. He sleeps at night wherever he feels comfortable and eats whatever is offered by people. The Hindu met him while he was at Shivapura near Tarikere earlier this week.

A native of Hoskote in Bengaluru Rural district, Vivekananda pursued a post-graduate degree in history, followed by a diploma in journalism and film production. Then, he began making ad films.

For almost 25 years, he hardly got down from his car. “I was always travelling by car as part of my work. Now, this journey by foot has helped me visit innumerable villages and meet lakhs of people. I have met many interesting people who have been working for the betterment of society in their own way,” he says.

His mother, wife and son reside in Bengaluru. “I gave whatever I had saved to my family, and my mother gets a pension,” says Vivekananda.

He no longer touches currency. “I don’t touch money. If you wish to get me a water bottle, you have to come to a shop and get it for me. Except on few occasions, I have not missed lunch or dinner, thanks to the generosity of people,” he says.

Vivekananda speaks of truth, honesty, non-violence with the people he meets. If politicians, swamijis, senior officers, journalists, doctors, lawyers and teachers remain true to their conscience, there could be a better world, he says.

On an average, he covers 30 kms in a day. The long walk, which began at Nagamarapalli in Aurad taluk of Bidar district on November 1, 2020, is expected to end in December this year at Chamarajanagar. He has weathered winter and hot summer. Now, he is expecting to experience heavy rains in Chikkamagaluru and Udupi districts.

Amidst the lockdown over the COVID-19 pandemic, he did not stop his walk. He could meet friends and well-wishers along the route because of his social media posts. “I have been active on Facebook and other social media platforms. People who are on my friends’ list are aware of my route, welcome me and offer food and water,” he says.