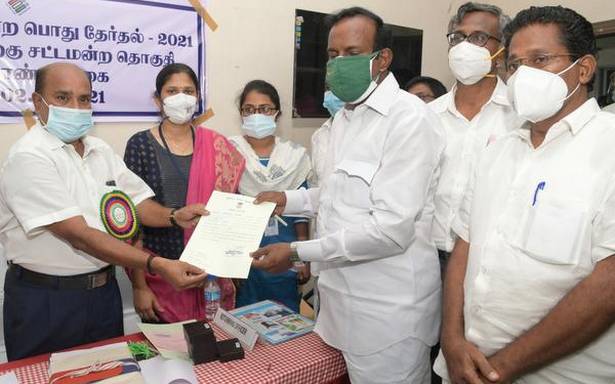 When these results were declared, the counting of postal votes was, however, in progress for the Modakkurichi Assembly constituency where the DMK was pitted against the Bharatiya Janata Party. If the DMK takes this seat, the scores will be level between the arch rivals.

AIADMK won the constituencies of Gobichettipalayam, Bhavani, Perundurai and Bhavanisagar and the DMK won Erode (West) and Anthiyur.

The AIADMK’s K.A. Sengottaiyan, who contested from Gobichettipalayam, secured 1,07,999 votes against G.V. Manimaran of DMK, who got 79,512 votes. Mr. Sengottaiyan won by a margin of 28,487 and is representing the constituency for the eighth time. In Bhavani, K.C. Karuppannan of the AIADMK bagged 1,00,285 votes and won against K.P. Durairaj of DMK, who got 77,079 votes. The victory margin was 23,206 votes.

In Perundurai, J.K. alias Jayakumar of AIADMK, won against K.K.C. Balu of Kongunadu Makkal Desiya Katchi (KMDK), who contested on the DMK’s symbol, the rising sun.

Thoppu N.D. Venkatachalam, former AIADMK minister and incumbent Perundurai MLA, who was removed from the party for contesting as an independent, secured 9,911 votes. In Bhavanisagar, A. Bannari of AIADMK won by a margin of 16,008 votes against P.L. Sundaram of the Communist Party of India (CPI).

Three constituencies saw a neck-and-neck fight from the first round of counting, and the winners had only a slender margin of votes. In Anthiyur, A.G. Venkatachalam of DMK got 79,096 votes against A.S. Shanmugam of AIADMK, who got 77,821 votes. The victory margin was 1,275 votes. In Erode (East) constituency, E. Thirumagan Evera (Indian National Congress) secured 65,472 votes while M. Yuvaraja (AIADMK) got 57,391. The winning margin was 8,081 votes.

C. Saraswathi (BJP) was battling it out against Subbulakshmi Jagadeesan (DMK) in Modakurichi, where the counting of postal votes was in progress. Winning contestants were given certificates by the returning officers concerned.

Irrfan Khan’s son Babil writes a moving post for mother Sutapa Sikdar: ‘She’s there for me’