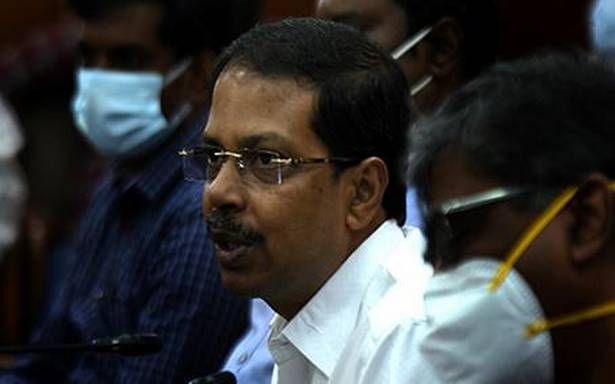 Every elector will be given a hand glove, says Satyabrata Sahoo

All COVID-19 norms, laid down by the Health Department, will be strictly followed by election workers during polling in Tamil Nadu on April 6, Chief Electoral Officer Satyabrata Sahoo said here on Monday.

At a press conference, he said every elector would be given a hand glove for pressing the button in EVMs. The Election Commission of India had ordered strict compliance with all precautionary measures recommended by the Health Department, he said. Physical distancing, wearing of masks and other precautions would be ensured at polling booths.

“All electors will be scanned with infrared thermometer. Those who are having fever or other COVID-19 symptoms will be issued a medical certificate and allowed to vote at the additional hour of polling,” Mr. Sahoo said. They will also be given a personal protective equipment kit when they come for casting their votes.

He said election officials would issue a voter identification slip to electors five days before polling; Along with it, the electors must bring any of the 11 documents recommended by the Election Commission for proof of identity. They are Aadhaar; MGNREGA job card; passbook with photo issued by banks or post office; health insurance smart card issued by the Ministry of Labour; NPR smart card; driving licence; PAN card; Indian passport; pension document with photo; Service identity cards issued to employees by the Central or State government or public sector units or public limited companies; and official identity cards of MLAs and MPs.

The political parties must submit the documents needed for star campaigners before March 22 and comply with the Election Commission’s guidelines for submitting the candidates’ criminal antecedents, he said. While documents are submitted for filing of nominations, only two persons will be allowed to accompany a candidate.

The Election Commission has increased the number of polling booths from 68,324 to 88,937, and 4,79,892 persons have been identified for election work across the State. Soon after the day of polling, the EVMs and the VVPATs will be shifted to 76 counting centres.In view of the election, the number of shifts at the control room has been increased to three to ensure round-the-clock service. “Before dialling 1950, the caller should dial the respective STD code,” Mr. Sahoo said. Every call will be recorded and action taken.