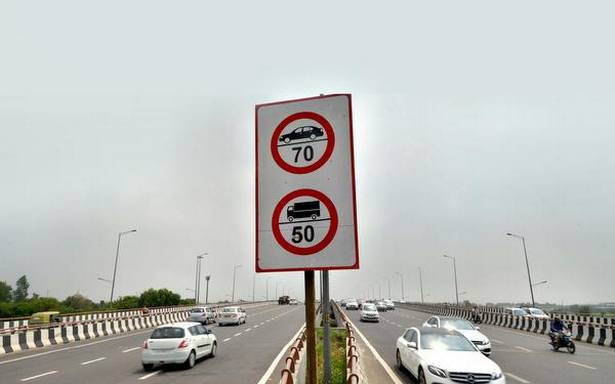 After a decade, speed limits across the city roads have been revised. For the first time, two-wheelers and local roads will also fall under the purview of these speed guidelines

Joint CP (Traffic) Meenu Chaudhary said that the Delhi Traffic Police has notified maximum speed limit for different categories of motor vehicles plying on city roads. The revision has been done keeping in view the traffic scenario, road safety and other key developments in road infrastructure.

According to road safety experts, enforcement will be a key component in relation to the revised speed limits along with the utilisation of road safety and engineering techniques, prioritising the lives of all road users.

“The last revision of speed limits on majority of roads was undertaken in 2011. Thereafter, in 2017 and 2019, maximum speed limit for a few roads was further revised,” said Ms. Chaudhary.

Professor P.K. Sarkar, road safety expert and member of Bureau of Indian Standards (BIS-ISO), said empirical studies had shown that an increase of one kilometre in the permitted speed limit was linked to a 2 to 3% increase in risk of accidents.

“One hopes that the speed limits have been revised where safety audits of the stretches concerned allow this. In Europe, for instance, speed up to 50 kmph is allowed outside urban areas and are restricted to 30 kmph inside them,” Professor Sarkar said.

“We are moving towards automated traffic challan generation system to bring more transparency in the system. The revised speed limits have been implemented and new challans have been issued accordingly,” said the policeman.

For the first time, speed limit for two-wheelers, which constitute the largest chunk of Delhi’s vehicular population, has also been fixed in the city limits.

The Capital’s vehicular population saw an addition of more than 5 lakh vehicles till March 31 last year, registering an increase of over 4% according to the Delhi Economic Survey 2020-21.

There were some variations in the speed limit at some stretches which have been corrected and speed limits have been made uniform, said the traffic police.

“There was a need to make speed limit uniform on Delhi roads as far as possible. Therefore, a revision of the existing speed limits was felt necessary,” said Ms. Chaudhary.

A police officer said that during the revision of speed limits, there have been no major changes in the speed limit in all categories of vehicles in view of road safety, however, this time the maximum speed limit for the loops of flyovers has been notified as 40 kmph.

Road safety expert S.M. Sarin said operating speed was also contingent upon the road environment. “The speed limit cannot practically be uniform across an entire stretch which may see patches of built-up area on some parts and desolation on others,” he said.

“For example, on the Outer Ring Road, a maximum speed of 70 kmph seems completely okay. But, it will have to be reduced when one enters a congested part of the city alongside the same stretch. Enforcement and driver education are going to play a major part in relation to the revised limits,” he said.

Also, now the maximum speed limit for taxis and cabs is notified at par with private cars on these roads, as per the notification which, according to taxi operators, is a major relief for both drivers as well as the passengers being ferried by them.

“We staged several demonstrations and even met Union Ministers as well as senior police officers over the issue of the discrepancy in the speed limits or private vehicles and taxis. Drivers and operators will be saved from the questionable fines they were issued for not adhering to impossible speed limits,” said Sanjay Samrat, president, Delhi Taxi, Tourist Transporters Association.

“It will also benefit passengers in a hurry, for instance, on their way to the airport or rushing due to an emergency, in reaching their destination on time. We appeal to the government to cancel all previous fines issued to taxi drivers which were issued for alleged violations in relation to old speed limits,” Mr. Samrat added.

This time, the maximum speed limit for residential areas, markets, service lanes and for minor roads inside all residential area, commercial markets and service roads has been notified as 30 kmph, the officer said.

The Delhi Traffic Police has requested the civic road maintaining agencies to erect corresponding informatory signboards at all prominent locations on the roads, indicating the notified speed limits for guidance and convenience of all road users and general public.

“The need of the hour is to ensure not only technology-based interventions such as Intelligent Transportation System [ITS] but also safety and road engineering solutions such as soft shoulders on highways. Iron wire can be used instead of concrete on the boundaries of highways to ensure the safety of those occupying vehicles that meet with accidents,” Professor Sarkar said.

“Another solution to help train drivers to stick to the speed limit and for enforcement officials to enforce it effectively is the utilisation of speed cameras linked with display boards on the road. These can warn errant drivers above the permitted limit at least once so they fall in line, failing which they can be prosecuted,” he added.