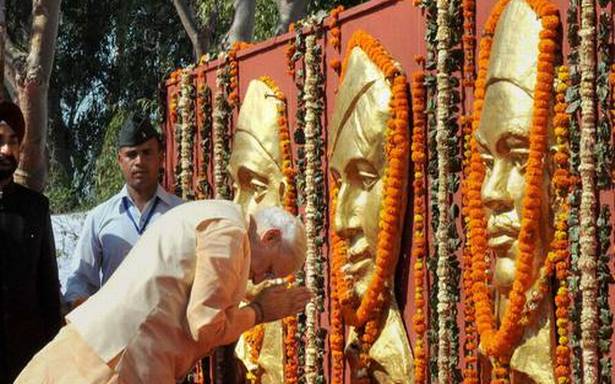 PM pays rich tributes to the revolutionary freedom fighter on his birth anniversary; greets Lata Mangeshkar on her 92nd birthday

Prime Minister Narendra Modi on Tuesday, September 28, 2021 paid tributes to revolutionary freedom fighter Bhagat Singh on the occasion of his birth anniversary, saying his courageous sacrifice ignited the spark of patriotism among countless people and he lives in the heart of every Indian.

Also read: A Grave Blunder: The Hindu on the execution of Bhagat Singh

Born in 1907, Singh was only 23 when he was executed by the British in 1931. His idealism coupled with his sacrifice made him a folk hero and an inspiration for many.

"The brave Bhagat Singh lives in the heart of every Indian. His courageous sacrifice ignited the spark of patriotism among countless people. I bow to him on his Jayanti and recall his noble ideals," Mr. Modi said in a tweet.

An iconic singer and an inspiration for generations of singers, Mangeshkar turned 92 on Tuesday.

Mr. Modi said, "Birthday greetings to respected Lata Didi. Her melodious voice reverberates across the world. She is respected for her humility & passion towards Indian culture. Personally, her blessings are a source of great strength. I pray for Lata Didi’s long & healthy life."