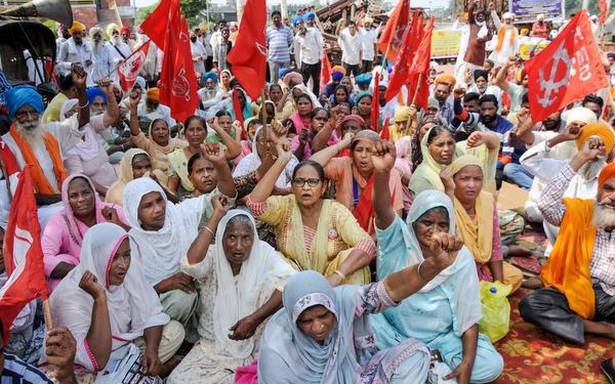 If there is bill wapsi, only then there will be ghar wapsi, says Bharatiya Kisan Union leader Rakesh Tikait

Farmers blocked highways and rail lines, shut down markets and institutions in some cities and States and held mass rallies across the country in response to the Samyukt Kisan Morcha’s nationwide strike call on Monday, exactly a year after the President gave his assent to the three contentious agricultural reform laws.

The SKM is a platform of farm unions which joined hands to protest the laws, whose members marched to the borders of Delhi in the tens of thousands 10 months ago to demand that the three laws be repealed. Their call for a Bharat Bandh between 6 a.m. and 4 p.m. on Monday was supported by major political parties including the Congress, Left parties, Akali Dal, YSR Congress, Trinamool, Aam Aadmi Party, Samajwadi Party, Bahujan Samaj Party, Rashtriya Janata Dal and Dravida Munnetra Kazhagam. Trade unions and transport unions also backed the bandh in some parts of the country, though some declined to shut down business even while offering “moral support” to the farmers.

Vehicular movement was disrupted on national and State highways in most parts of Punjab and Haryana, with hardly any public transport, buses or taxis seen on the roads. Shops and commercial establishments were closed in many parts of the two States which make up the largest mass of the protesting unions, though the situation was normal in their joint capital Chandigarh.

Train tracks were blocked at more than 20 locations in the northern zone, with the Railways saying at least 25 trains were affected in the morning. There were also reports of train tracks being blocked at some locations in Bihar and West Bengal.

In the national capital, there were massive traffic snarls at Gurugram and Ghazipur as Delhi’s borders with Haryana and Uttar Pradesh saw increased security due to the farmers protests as the Delhi police instituted intensive checks of vehicles entering the city.

The national trade unions held a solidarity protest in Jantar Mantar. Speaking on the sidelines of an event, Delhi Chief Minister Arvind Kejriwal urged the Centre to consider the farmers’ demands. “Bhagat Singh, [whose birth anniversary is being celebrated], did not fight for freedom for a day when farmers have to sit on the streets and protest for a year to get their demands considered,” he said.

In Kerala, the bandh was complete in most parts of the State with a full shutdown of normal life. There was a more lukewarm response in Karnataka, with some protesters detained in Bengaluru. Heavy rain in Telangana and Andhra Pradesh dampened protest activities, but the farmers’ cause was supported by most political parties, including the ruling YSRCP in AP, which suspended the State bus services and declared a school holiday. Farmer bodies staged protests in parts of Tamil Nadu as well.

Markets were shut and public transport stayed off the roads in Odisha and Jharkhand. The RJD and the Congress workers blocked roads and rail tracks in parts of Bihar. Rallies were held in parts of Rajasthan, with train services affected in border districts. There was little impact on normal life in Mumbai, Madhya Pradesh, Gujarat, Assam or Arunachal Pradesh.