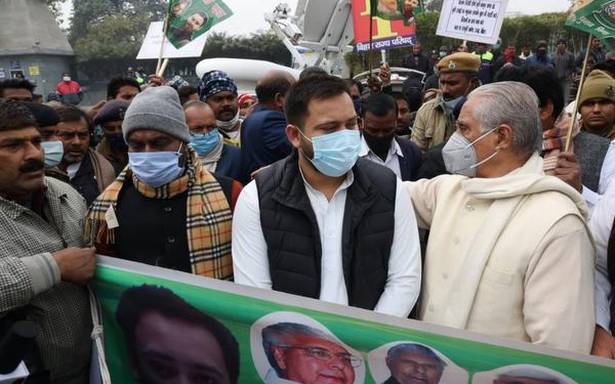 The Opposition mahagathbandhan in Bihar organised a human chain across State on Saturday against the new farm laws and to express support for the protesting farmers in Delhi.

Leaders of all three Left parties, RJD and Congress participated in the human chain at designated places for about 30 minutes at 12:30 p.m. Leader of the Opposition in the Assembly and RJD leader Tejashwi Yadav joined the chain outside the Buddha Smiriti Park in Patna.

While several opposition leaders joined the chain, others chose to were present at various points but maintained social distancing in view of the COVID protocol.

Human chains were organised in the too with leaders shouting slogans against new farms laws and in support of agitating farmers against it in Delhi. “Our support is with protesting farmers and it will continue until the government revokes the new farm laws,” opposition leaders said in Patna.

They also urged Chief Minister Nitish Kumar to “revoke” the scrapping of the APMCs (Agricultural Produce Market Committee) in the State and set up more mandis (markets) for farmers.

Responding to the event, Mr. Nitish Kumar said, “Forming human chain was started first by JD(U) in 2017 against prohibition and then on Jal Jeevan Hariyali programme of the government as well last year. It seems they (Opposition) have taken a leaf of forming human chain. But, everyone has the right to hold such programmes.”

JD(U) leaders took potshots over the alleged thin participation in the human chain.