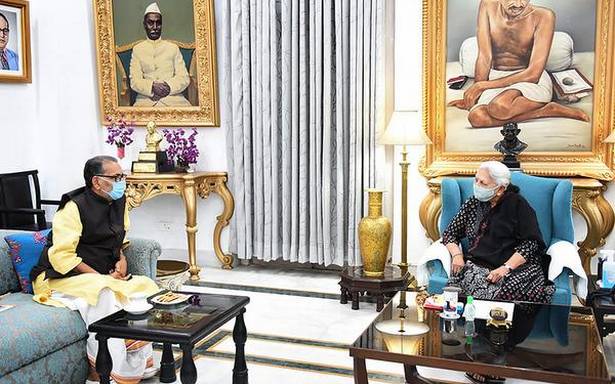 Amid reports of stocktaking within the BJP ahead of the Uttar Pradesh Assembly election next year, the party’s State in-charge, Radha Mohan Singh, called upon Governor Anandiben Patel here at her official residence on Sunday.

While Mr. Singh described the visit as a courtesy call, the political significance of his trip to the U.P. capital was not lost on anyone amid speculation of changes coming up in the government and party.

“It is a mere formality,” he said on the sudden visit.

Mr. Singh said he had called upon Ms. Patel as he had been unable to meet her on past occasions.

When asked by presspersons outside the Raj Bhavan if any reshuffle of the State Cabinet headed by Chief Minister Yogi Adityanath was on the agenda, Mr. Singh said there was no such matter.

Mr. Singh’s praise for the Yogi Adityanath-led government comes after party general secretary (organisation) B.L. Santhosh visited Lucknow and met party leaders and Ministers here as part of a stocktaking exercise and lauded the Chief Minister for managing the COVID-19 pandemic “quite effectively”.

Mr. Singh also called upon the Speaker of the Uttar Pradesh Assembly, Hriday Narayan Dixit. The State unit of the party also seemed to back the Chief Minister.

Asked by presspersons about Mr. Singh’s visit, BJP U.P. president Swatantra Dev Singh said the BJP was a “karyakarta-based [worker] party” and the leaders had regular tours and meetings.

“Because this is not a party of a dynasty or a family… Here, karyakartas are screened and developed as someone who can provide leadership in the future and direction to the society and country,” he said.