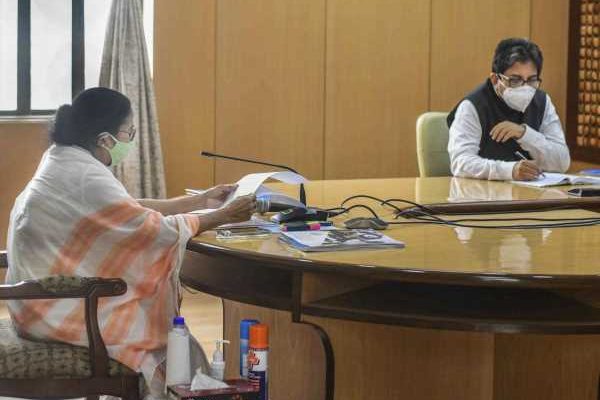 ‘Just because there is some misunderstanding, you cannot recall the chief secretary.’
‘This is not a good development. This is an assault on federalism.’

Former Union minister M Veerappa Moily on Sunday said the relationship between the Centre and states has become ‘more strained’ under the Prime Minister Narendra Modi-led dispensation and the government should not behave like a big brother.

In an exclusive interview with PTI, the former chairperson of the Administrative Reforms Commission also said the government should call a meeting of the National Integration Council (NIC) to strengthen federalism.

Following is the transcript of the interview:

The Centre recalled the West Bengal chief secretary hours after the PM-Mamata cyclone meet row. What is your take on this?

It is a total misunderstanding.

The government of India should not act as a big brother. They have to cooperate and collaborate with the state government.

Creating friction is not going to solve the problem.

In a federal setup, the state will have to cooperate. You have to enlist their cooperation. By implementing programs, by merely giving money, you are not going to solve it. This is not pleasant.

The blame goes equally to the central government and the state government.

Just because there is some misunderstanding, you cannot recall the chief secretary. This is not a good development.

This is an assault on federalism.

As far as reports regarding Mamata Banerjee giving her meeting with the prime minister a miss are concerned, she has given her clarification and that has to be taken in the right spirit.

One should not politicise it when the state is in distress.

The PM should lend his support rather than finding fault with the chief minister.

Is the Centre-state relationship crumbling, especially after Mr Modi took over as PM in 2014? How do you see this?

It is more strained. That is what we have to look at. During such calamities (Cyclone Yaas) earlier, the Congress or the United Progressive Alliance never used to politicise such issues.

They never used to bring politics into it.

But today, politics has started in everything. Introspection will have to be done by PM Modi and the government of India.

They should not act as a big brother. They will have to collaborate with state governments.

Be it medicines, oxygen supply or vaccination drive, the country has witnessed the Centre and opposition-ruled states lock horns over such issues.

Ultimately, be it Kolkata or Bengaluru or Thiruvananthapuram, people are the same.

They are all Indians and the government of India has duties towards every citizen of this country, they cannot distinguish (between people).

People of states governed by other (opposition) parties are not foreigners, they are a part of India.

This is a dangerous trend for the unity and integrity of the country.

That will ultimately affect the unity of the country.

Is it due to a trust deficit or ideological differences?

We are citizens of one country. What is the ideological difference in it? We are politicising everything.

This is not a good trend. This will ultimately affect the unity and integrity of the country.

Even when the prime minister, during his election rallies, called for a double engine government, that statement itself is dangerous.

How can a state ruled by another party be of a single-engine?

The Centre and states have had a relationship of conflict rather than cooperation in the last few decades. What should be the mechanism for conflict resolution?

It is high time that the prime minister calls for a National Integration Council meeting.

You know that the Planning Commission has been dissolved, there is nothing to hold the entire country (together).

This is the most unfortunate trend. The Planning Commission was there for financial integration.

Now for concerns regarding political integration, there is nobody.

They have integrated everything within the Niti Aayog.

The Niti Aayog has become a department of the government of India. It has no autonomy or no autonomous functioning.

The planning commission used to enjoy a lot of autonomy.

The National Integration Council meeting used to be a very important meeting and its proceedings used to bind all the states together.

The Planning Commission concept was the best and had served the country. It will have to be revived.

The NIC is the best method to unite and strengthen federalism, which has to be revived.

It is high time the PM rethinks all these things that he has held up, which is not good for the country.

You have also headed the second Administrative Reforms Commission. What are your suggestions for the government?

I have given 15 reports on various aspects including disaster management but this government is just forgetting about them.

One unfortunate aspect of this Modi government after 2014 is that they don’t have institutional memory which the Congress party had.

The 15 reports given on various aspects should be looked at again and they will have to be implemented.

Apart from this, what more you would like to suggest to the government?

All this anarchy, all this confusion is because one person would like to control everything.

A lot of decentralisation should take place.

After all, states should have enough and sufficient autonomy which can’t be taken away on everything.