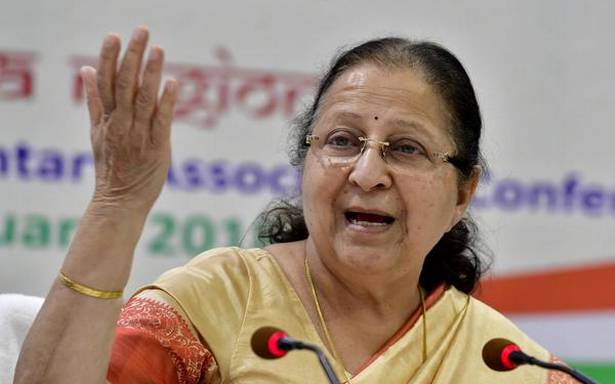 Shashi Tharoor and some media outlets, on April 22, had shared news of her demise.

On April 23, former Lok Sabha Speaker Sumitra Mahajan, 78, clarified that she was very much alive. The clarification came after Congress leader Shashi Tharoor and some media outlets, on April 22, announced her demise.

Mr. Tharoor and others deleted the tweets after BJP leaders pointed out that she was hale and hearty.

“What should I do? These people carried the news without any confirmation. They should have at least confirmed with the district administration in Indore,” Ms. Mahajan is heard saying in an audio clip.

“The Central government and Lok Sabha Speaker Om Birla should take note of this,” the BJP veteran says in the clip.

“This became all-India news. I started getting calls from my relatives in Mumbai. My brother’s daughter responded to Mr. Tharoor’s tweet asking who gave him this fake news.”

After deleting the tweet, Mr. Tharoor had said he was relieved that Ms. Mahajan was doing fine and that he banked on “a reliable source” in putting out his tweet.

She earlier represented the Indore Lok Sabha constituency in Parliament for eight terms.