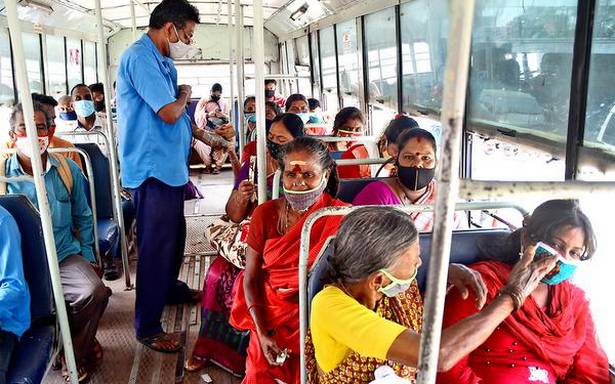 While the MTC has shelved ETMs due to legal reasons, Southern Railway has restricted the UTS app due to the unavailability of unreserved tickets

One of the COVID-19 prevention norms for public transport is maintaining physical distancing with minimal interactions. While digital transactions for issuing tickets can be handy, public transport systems in the city, including the suburban trains, dish out more printed tickets than enhancing the digital mode.

The Metropolitan Transport Corporation (MTC), which migrated to issuing bus tickets through electronic ticketing machines (ETMs) years before the pandemic, has discontinued the system and has gone back to the old format of issuing printed tickets to commuters.

The MTC had started using ETMs based on complaints from commuters about conductors using saliva to issue tickets. Also, conductors were relieved of keeping tabs of the collections at different stages and the hassle of manually counting the amount to tally with the collection book at the end of the day.

S. Arulmani, a public transport user from Medavakkam, wanted the MTC to go back to the old system of issuing e-tickets at the earliest. He also pointed out the quality of tickets being printed has come down.

MTC officials said the usage of the ETMs were stopped after the contract with the vendor came to an end. Moreover, the MTC was unable to proceed with a new contract as a court case was pending regarding the selection of vendors for purchasing new ETMs.

Even the Southern Railway, which has one of the best ticketing applications for suburban commuting in the country, has put out restrictions for using the Unreserved Ticketing System (UTS) app during peak hours, when crowding is at its worst. This forced commuters to purchase tickets at the counters, leading to long queues in some railway stations and resulting in physical distancing norms being flouted, passengers said.

The Railway Board has directed the Southern Railway to remove all travel restrictions for common public to travel in suburban trains even during peak hours, with the only condition that commuters must produce a vaccination certificate.

Southern Railway officials said allowing the general public with two-dosage vaccination certificates to travel during peak hours was a decision taken at the divisional level. But linking of digital vaccination certificates with the UTS app was not within the purview of the division, as the ticketing application was a broad-based software serving the entire country, they said.

Presently tickets are issued upon showing the certificate at the counter, either digitally or as a hard copy, an official said. He also pointed out that once unreserved tickets in express trains are permitted, the UTS app will be enabled round-the-clock.

B. Guganesan, Chief Public Relations Officer of Southern Railway, said the Centre for Railway Information Systems (CRIS) was working on linking the digital vaccination certificate with the UTS app for hassle free travel in the future. He said the commercial staff in the ticket counters had been directed to follow the issuing of train tickets strictly as per the protocols issued by the Railway Board.