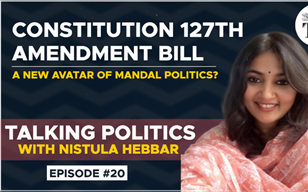 In this episode of Talking Politics with Nistula Hebbar, we discuss the debate on the Constitution 127th Amendment Bill during the just concluded monsoon session.

There are growing demands by political parties across the board, including NDA allies and in one inadvertent case from a BJP MP as well, that a caste-based census be now undertaken.

Such an exercise, revealing the true extent of the Other Backward Classes population, would then lead to raising the 50% cap on reservations currently in place.