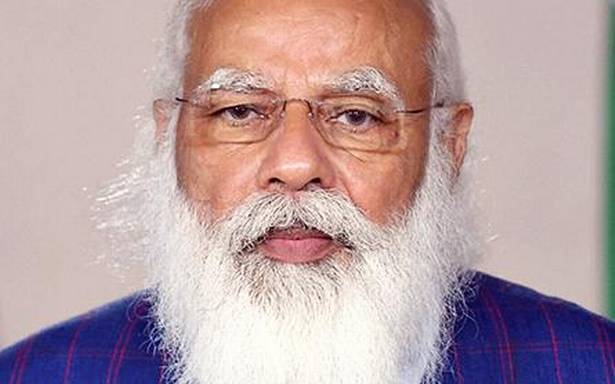 India on Wednesday welcomed the supply of emergency medical equipment from partner countries but hinted that it was unlikely to accept offer of support from Pakistan.

The list of countries that have promised critical items such as oxygen concentrators lengthened with the addition of Romania, Luxembourg and Sweden. Prime Minister Narendra Modi held a telephone conversation with Russian President Vladimir Putin on Wednesday on oxygen-related items and vaccines, including India-Russia cooperation on the Sputnik V vaccine.

Continuing with India’s interaction with the big powers, Mr. Modi spoke with President Vladimir Putin during Wednesday evening regarding India-Russia cooperation on Sputnik-v vaccine among other issues

“We are accelerating the process of cooperation to ensure a steady flow of items like oxygen concentrators and oxygen generators,” said a source, explaining that overseas assistance was expected to be in the form of emergency grants as well as “procurement” by Central and State governments.

Sources said India had no “conceptual problem” in sourcing necessary equipment from China, as seen when SpiceJet recently airlifted 800 oxygen concentrators from Hong Kong. China’s Ambassador to India Sun Weidong posted on social media that cargo aircraft from China were expected to fly medical supplies to India and, “Chinese medical suppliers are working overtime on orders from India, at least 25,000 orders for oxygen concentrators [were taken] in recent days.”

Sources also said that India was unlikely to respond to offers of support made on social media by leading figures in the Pakistan government. The more substantial offer of assistance from Pakistan’s Abdul Sattar Edhi Foundation, which had promised to send a large fleet of ambulances and health workers to India, is also unlikely to get a nod from New Delhi.

An official in the know of the international mobilisation said the authorities were looking for oxygen-related devices from abroad to address the surge in demand at home. “This is not an international appeal. We had shared the list of necessary products with our Embassies,” said the official, indicating that the current coordination with foreign partner countries will follow the model that India generally follows in accepting developmental support from partner countries in normal times. A similar widespread mobilisation of support was witnessed in the aftermath of the 2004 Indian Ocean tsunami.

On Wednesday, Singapore became one of the first countries to fly oxygen cylinders and other critical supplies on board two C-130 aircraft to Panagarh in West Bengal. “As far as we are aware, Singapore is among the first countries to contribute cylinders at the government level. 7,511 oxygen concentrators, 516 BiPAPs, and 256 oxygen cylinders have either arrived or are on their way to India as soon as possible. We have also facilitated the shipment of eight cryogenic tanks with more on the way,” said Simon Wong, Singapore’s High Commissioner in India.

The consignment from Singapore arrived ahead of the expected medical and oxygen supplies from the United States, which was placed on the fast track after President Joe Biden spoke with Mr. Modi on April 26. India is “hopeful” that the items from the U.S. will arrive here by Friday.

Significantly, State governments are also “free to procure” necessary items from partner countries as part of the ongoing mobilisation. They are expected to work in coordination with the Indian Red Cross Society, public sector undertakings, NGOs and the Central government, while procuring oxygen-related items and medical supplies. Switzerland has announced that it will distribute oxygen concentrators and other medical equipment in India via the Indian Red Cross Society.