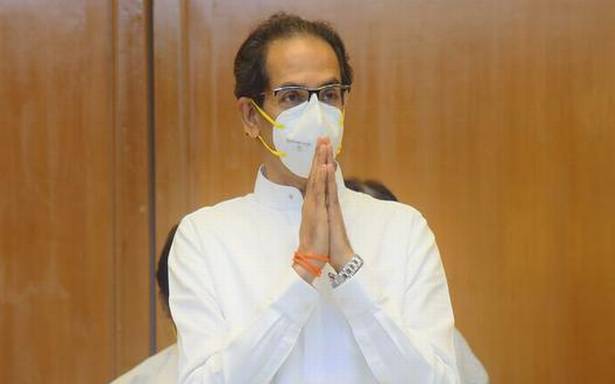 The supply of vaccines from the Centre to Maharashtra was “very slow”, said Chief Minister Uddhav Thackeray on Friday, reiterating the State’s demand for increased vaccine doses.

Mr. Thackeray, speaking during Prime Minister Narendra Modi’s meeting with Chief Ministers of the worst-hit pandemic States, cited the example of countries such as Israel and the United Kingdom which had succeeded in controlling the virus with their large-scale vaccination drives.

Gunning for increased supplies of vaccines and medicines, Mr. Thackeray further said that while the value of Remdesivir in absolutely curing COVID-19 patients might be questionable, Maharashtra would nevertheless need to have adequate stocks at all times as the anti-viral drug would at least help in reducing the duration of the patient’s time inside the hospital

He said that while Mr. Modi had urged the imposition of a lockdown as a last resort to rein in the pandemic, Maharashtra had no option but to impose stringent restrictions given its dire situation.

“I had a positive discussion with the Prime Minister and expressed my confidence that Maharashtra would win the fight against COVID-19. I also informed him that we have deployed many retired doctors, nurses and medical students to combat the crisis and emphasis is being laid on telemedicine and tele-ICUs so that patients can start treatment immediately,” said Mr. Thackeray, in a statement issued by the Chief Minister’s Office (CMO).

The State, which has been witnessing a daily average spike of more than 60,000 cases a day, is the worst affected in the country with its active case tally crossing seven lakhs.

“Maharashtra has been conducting the highest number of vaccinations since day one. However, we need enough vaccines to replenish our centres. Given the limited capacity of vaccine manufacturers, we also need to be guided as to whether we can increase vaccination by importing vaccines from other countries,” the Chief Minister said.

Observing that the population in Maharashtra between the ages 18-44 was more than five crore, Mr. Thackeray expressed worry that indigenous vaccine manufacturers might not be able to supply doses in large numbers in such a short period of time.

“More clarity is needed as to which State will be supplied by the Centre in what quantities of vaccine. If the State asks permission to import vaccines, it should be granted,” Mr. Thackeray suggested during the meeting.

Mr. Thackeray further told the Prime Minister that a comprehensive study of the ‘double mutation’ of the virus — several samples of which originated from Amravati district in Maharashtra — was urgently needed.

“A proper study of the double mutation of the virus in the State which is believed to be the cause behind the rapid increase in infections is needed to help determine appropriate policy,” he said.

More than 60,000 patients currently are in dire need of oxygen while the State needs around 1,550 MT of oxygen per day.

“Given the ever-increasing number of patients, we need additional stocks of 250 to 300 MT. Given the time required in transporting oxygen by rail, we need the help of the Indian Air Force and the National Disaster Management department,” Mr. Thackeray urged Mr. Modi.