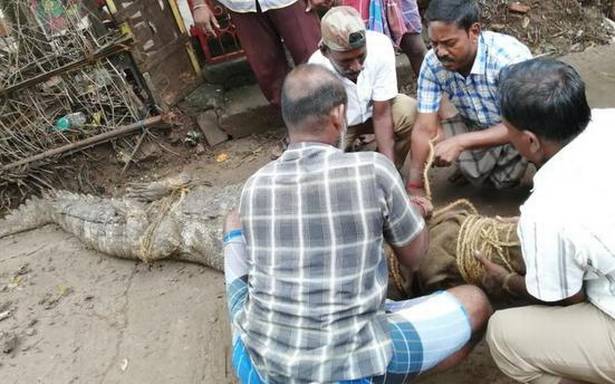 With waterbodies in Chidambaram drying up, instances of crocodiles entering human habitations have been on the rise

An eight-foot-long crocodile that had strayed into Sivayam village near Chidambaram created a flutter on Friday.

Local residents spotted the crocodile basking in front of a pond and alerted the Forest Department. The reptile had strayed from the Kollidam River and got stranded in the village. It was trapped by a team of Forest Department personnel who later transported and released it into the Vakkiramari tank in Chidambaram, which is a habitat for such reptiles.

The Vakkiramari tank that supplies drinking water to Chidambaram town is maintained by the municipality. The move was resorted to not only to keep the reptiles away from human habitations but also to safeguard the tank.

With waterbodies in Chidambaram drying up, instances of crocodiles entering human habitations have been on the rise.