Gujarat, on its part, is taking lessons from Odisha, which had recently witnessed the severe cyclonic storm Fani. According to the India Meteorological Department, Vayu is expected to touch the coast between Porbandar and Mahuva around Veraval and Diu region as a Severe Cyclonic Storm with wind speed of 110-120 kmph gusting to 135 kmph on the morning of June 13. It is likely to cause heavy rainfall in the coastal districts of Gujarat along with storm surge, which may cause inundation in low-lying coastal areas of Dwarka, Porbandar, Junagadh, Diu, Gir, Somnath, Amreli and Bhavnagar districts.

Following the meeting, the Home Ministry issued detailed advisories to Gujarat and Union territory of Diu to take all precautionary measures and ensure that no human life is lost, damage to vital infrastructure is minimised and for early recovery of all essential services post-cyclone landfall. The governments have also been asked to prepare for timely evacuation of people from low-lying coastal and vulnerable areas, a ministry official said.

The Gujarat and Diu administration have planned to evacuate about 3 lakh people from the identified vulnerable areas early June 12, the official said.

“The evacuated people will be shifted to around 700 cyclone/relief shelters. In consultation with State Administration, 39 NDRF Teams are being pre-positioned in Gujarat and Diu for helping the State/UT Administration in evacuation, search, rescue and relief operations. In addition, 34 teams of Army are also put on stand-by,” an MHA statement said. “Union Home Minister is regularly reviewing the situation and Union Home Secretary will take a review meeting on 12th June with the Central Ministries/Agencies and Chief Secretary/Adviser of Gujarat and Diu.” 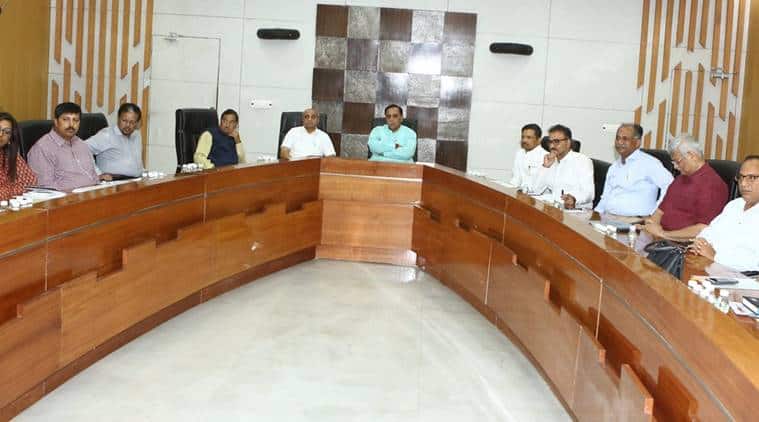 “It was a communication that included discussions on all possible preparedness towards Vayu, though the intensity of Vayu and Fani differ hugely. Vayu is expected to be a lower intensity storm. Thus, at this point it was a normal communication, but if there is anything particular in the coming hours, we will be in touch with them again,” Singh told The Indian Express.

A high-level meeting was chaired by CM Vijay Rupani. The chief secretary also took a review meeting on the situation and.

The National Crisis Management Committee met under the chairmanship of Cabinet Secretary Pradeep Kumar Sinha and reviewed preparedness for Vayu. The Gujarat chief secretary and Advisor to Administrator, Daman and Diu, apprised the NCMC of preparatory measures in place for Vayu.