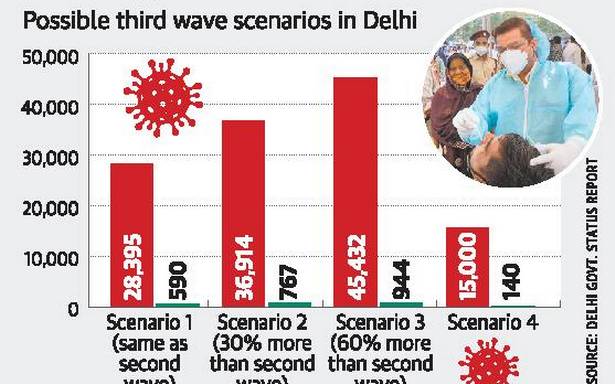 The Delhi government is currently considering four scenarios for a possible third wave of COVID-19 in the city. Alarmingly, in one of the scenarios, the daily new cases could be as high as 45,432, as per an official report seen by The Hindu.

In the first scenario, the daily new cases could be as high as 28,395, which is the same as the second wave. In the second scenario, it could be 36,914, which is 30% more than the second wave. According to the third estimate, the number shoots to 45,432, which is 60% more. The fourth projection offers a bit of respite, with the case count expected to be around 15,000.

The government is also making plans for oxygen arrangements for each of these scenarios. The scenarios are based on a report submitted to the Delhi government by the IIT-Delhi. “These are preliminary estimates. The Delhi government has asked IIT-Kanpur to form a team, including epidemiologists and other experts, to come up with more accurate predictions of when the third wave could hit the city and how high the cases could be. But it will take more time for them to submit a report,” a Delhi government source said.

The Delhi government will be giving the city’s data including, cases and vaccination, to IIT-Kanpur to come up with the prediction, the source said.

Only nine of the 58 Pressure Swing Adsorption (PSA) oxygen plants have been made operational in Delhi government hospitals so far, as per the report. This shows the government has missed the previous deadline given by Chief Minister Arvind Kejriwal that 44 plants should be operationalised before May 31.

On April 27, he had said that 44 oxygen plants will be installed in a month at hospitals in the city. “After installing these 44 plants in different hospitals, oxygen supply will improve,” Mr. Kejriwal had said.

The city had faced a grave oxygen shortage during the second wave, which led to several deaths due to hospitals running out of oxygen. These 58 plants were given by the Central government, France, and through CSR and are to be made operational in Delhi government hospitals. All plants will be up and running only by July 31 and the government is in the process of installing them, the report says.

However, when asked whether the 20 plants are operational, the spokesperson refused to comment.