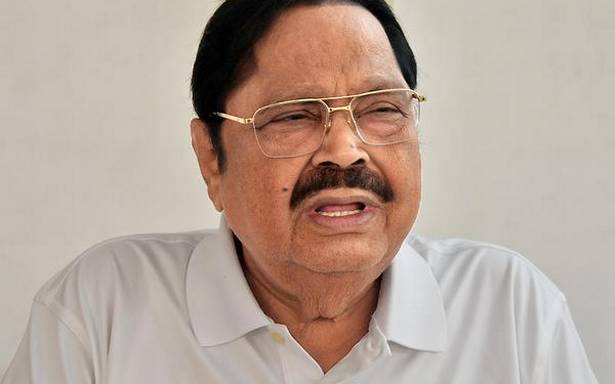 Water Resources Minister and Leader of the House Duraimurugan, who first entered the Tamil Nadu Legislative Assembly 50 years ago in 1971 turned emotional on Monday when the House led by Chief Minister M K Stalin felicitated him. A veteran DMK man he had won in 10 Assembly elections – eight times from Katpadi constituency and twice from Ranipet – and lost only on two occasions in the past five decades.

The Minister swore that he would follow the path of the Dravidian Movement and party leader Mr. Stalin.

Mr Duraimurugan, who is known for his debates and oratory in the House, could not complete his sentence as he became emotional and took his seat with folded hands.

Earlier, thanking the Chief Minister for moving a resolution and members of the House who spoke in praise of his contribution, Mr Duraimurugan said, “I would live up to the faith you have reposed on me.”

“I do not know how I will repay the love showered on me. My leader has so much love for me and if it were some other place, I would have hugged him and cried. I thought there would be a vacuum after my leader’s [former CM M Karunanidhi] death. But Mr Stalin has not only filled the vacuum, but also gone further and excelled,” he added.

Mr Duraimurugan recalled he had moved closely with former Chief Ministers C N Annadurai, Karunanidhi, M G Ramachandran and now Mr Stalin. “For the first time I do not have words to express my feelings,” he said.

Recalling his association with Karunanidhi, his "guide, mentor and a friend with whom he would spend hours chatting", Mr Duraimurugan said, “Kalaignar asked about my caste only when he fielded me in the election. He treated me like a friend even when I was a student.”

Mr. Stalin said he would even be envious sometimes as Karunanidhi would spend hours with Mr Duraimurugan. “If he did not visit our house, Kalaignar would ask us to call him,” he recalled.

“When he was admitted for a surgery, Kalaignar spent the whole night with him in the hospital,” he added.